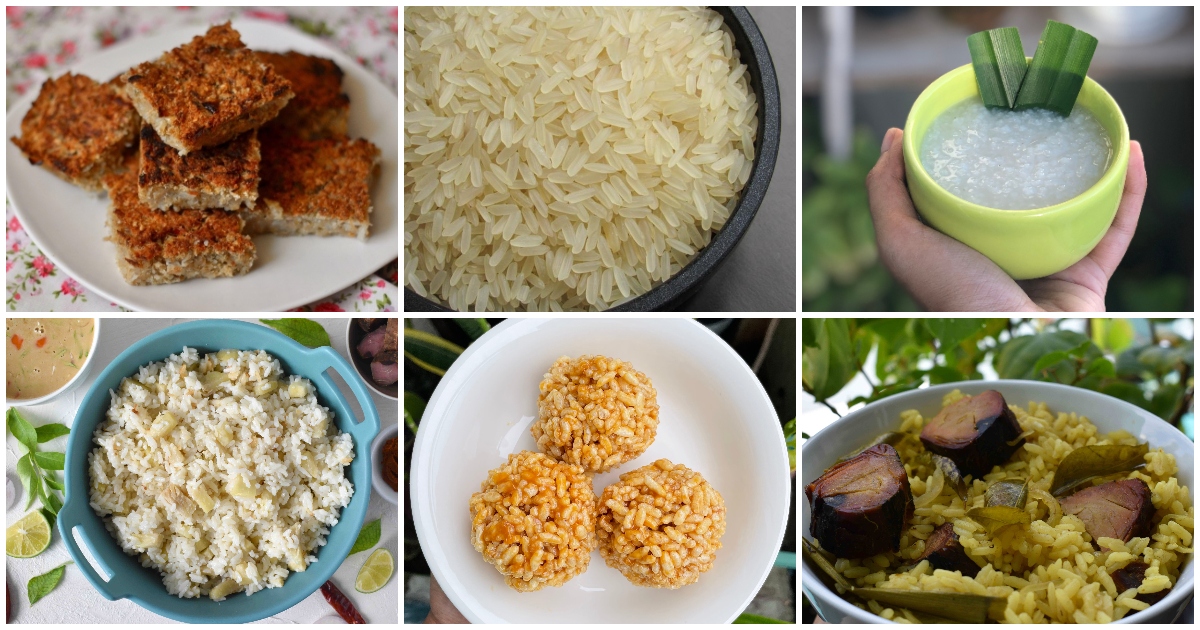 Like most Asian countries, rice is a staple ingredient in the Maldivian cuisine as well. Not only do we eat rice as a source of carbs, but we also make a variety of other dishes – both savoury and sweet – from it.

Since the olden days, rice has always been imported into the Maldives; our climate and land quality make it impossible to grow the grain in the country. In the local language, Dhivehi, uncooked rice is called handoo; when cooked, rice is known as baiy.

The type of rice usually eaten in the Maldives is a medium-grain, white parboiled rice known as haru handoo in Dhivehi. This rice has a higher starch content and a certain bite to it. However, more recently, basmati rice (known as hudhu handoo) as well as brown rice and red rice are eaten in the country although all rice-derived snacks are made with haru handoo. 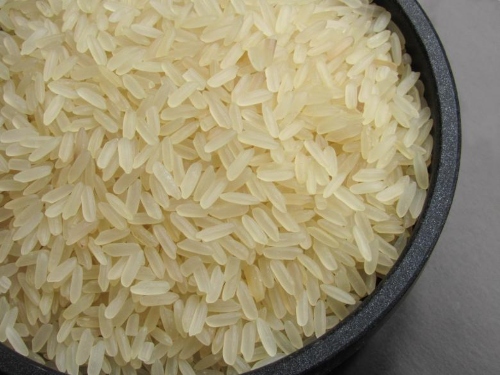 Rice is traditionally cooked with coconut milk, which gives the rice a slightly milkier and robust taste. Typically, rice is eaten for lunch or dinner with a fish and broth-based side such as rihaakuru (Maldivian fish paste), garudhiya (Maldivian fish broth), kirugarudhiya (coconut milk-based non-spicy curry) or riha (spicy curry). 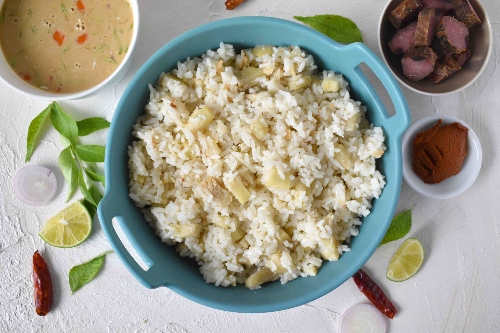 Bambukeyolee baiy (rice cooked with cubed breadfruit) is also widely popular, usually eaten with rihaakuru dhiya (a broth made with rihaakuru and coconut milk).  Another important rice dish in the Maldivian cuisine is masbaiy (which translates to fish rice), a one-pot rice dish made with tuna and turmeric. Although traditional masbaiy is made with fresh tuna chunks, nowadays it is made with both valhomas and canned tuna as well. 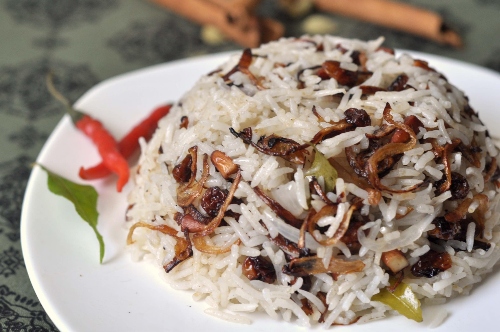 Handulu bondibaiy (Maldivian rice pudding) is a dessert made by cooking rice with coconut milk, sugar, and aromatics, until it reaches a pudding-like consistency. However, unlike the Western rice pudding, the rice in bondibaiy has a hard bite to it (kind of like Thai sticky rice!). Bondibaiy is typically eaten with kulhimas (spicy fish) on special occasions such as Eid and on naming newborns. 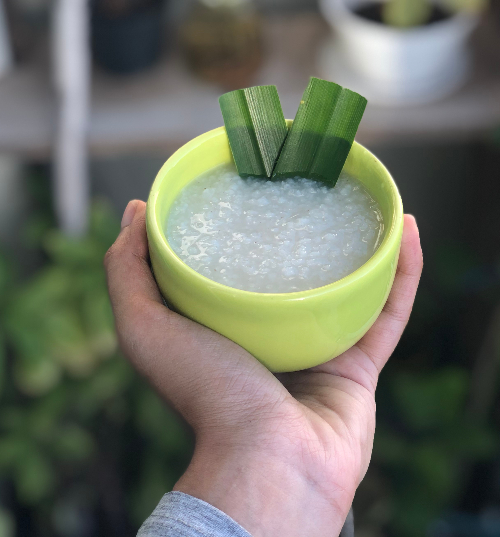 Another quintessential Maldivian rice-based dish is baipen, a bland rice porridge eaten with maskurolhi (tuna and coconut sambal). Baipen is typically eaten during Ramadan, for iftar. A savoury version of this – kulhi baipen – is also made by adding spices and aromatics to the porridge when cooking.

A variety of Maldivian short eats (hedhikaa) and snacks are also rice-based. 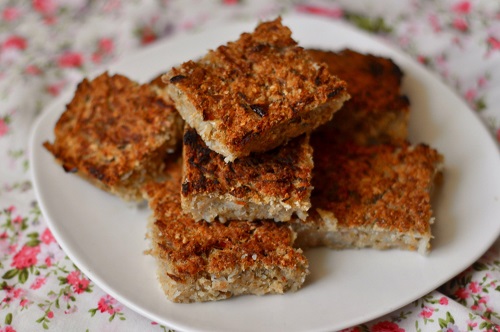 Handoo can be soaked overnight and ground to make a coarse flour known as handoo fuh which is then used as a base to make different types of hedhika. Some savoury favourites made with handoo fuh are kavaabu (deep-fried mixture of tuna and rice flour) and handulu gulha (gulha made with a rice dough, filled with a tuna-coconut mix).  Different types of boakibaa – which is a collective term for a Maldivian baked dish (either savoury or sweet) – is also mainly  made with handoo fuh as a base, including kulhi boakibaa, kiru boakibaa and githeyo boakibaa. Hedhikaa is best enjoyed at tea time with a cup of piping hot kalhu sai (black tea). 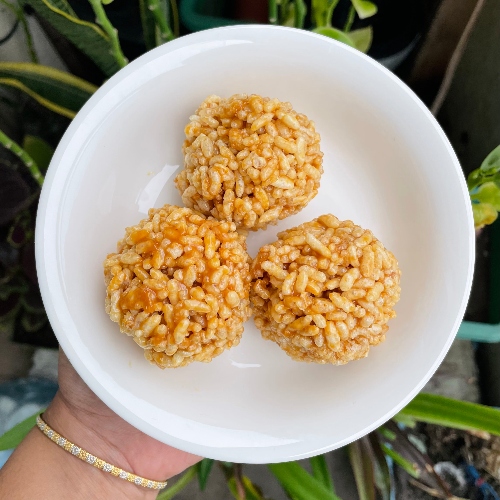 Handoomaa – a type of puffed rice – is also eaten as a snack. Leftover baiy or cooked rice is washed in water to separate the grains, then left out in the sun to dry. After this, the dried grains are fried in hot oil, which causes them to puff up. Handoomaa can be eaten on its own, usually lightly sweetened with some sort of sugar. Sometimes, baiy gulha or sweetened rice balls are made with handoomaa, where it is mixed with some sort of sugar (usually dhiyaa hakuru or Maldivian honey) and made into balls. Handoomaa can also be eaten as a savoury snack, mixed with tuna (either canned or smoked), chopped onions, chillies, lime and salt. Certain traditional, medicinal snacks such as hili beys, typically given to new mothers to help with recovery, is also made with handoomaa in it.

Local snacks such as bondi (a cylinder-shaped, sweet snack made in the Southern islands of Maldives) is also made with rice. Kulhi bondi – the savoury version of this made by adding black pepper and other spices to the bondi – is also rice-based.

For more rice-based dishes check out our collection of recipes here.