The Dip Delivers a Counterintuitive Combo 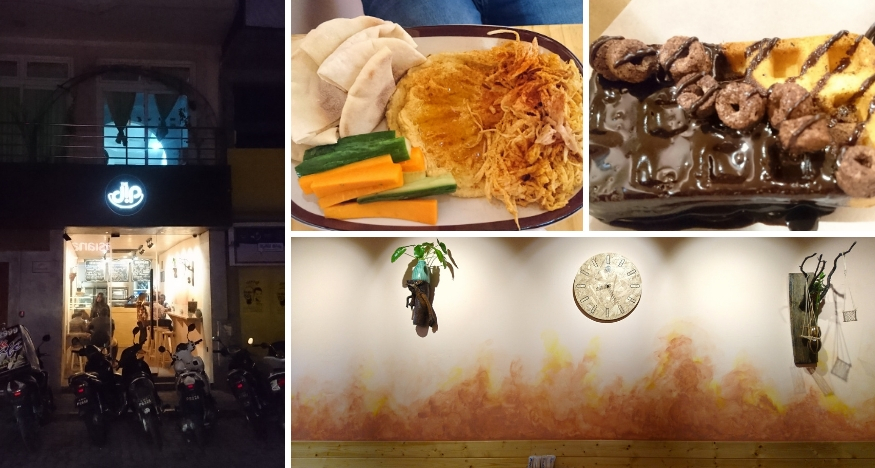 When I first heard about The Dip, I was a bit sceptical; waffles and hummus? It just seemed too incongruous a combination, the kind of thing that might pop into your head clothed as a good idea after several nights of sleeplessness.

In spite (or maybe because) of this, the popularity of The Dip has hardly dipped since they opened. I had to pay them a visit.

And here I am with Zubi (Instagram: adamzubin/adamzubinworks), a food designer and photographer of some acclaim, who was involved in the great but shortlived Chop-Chop, if you can recall that takeaway place from a few years back. 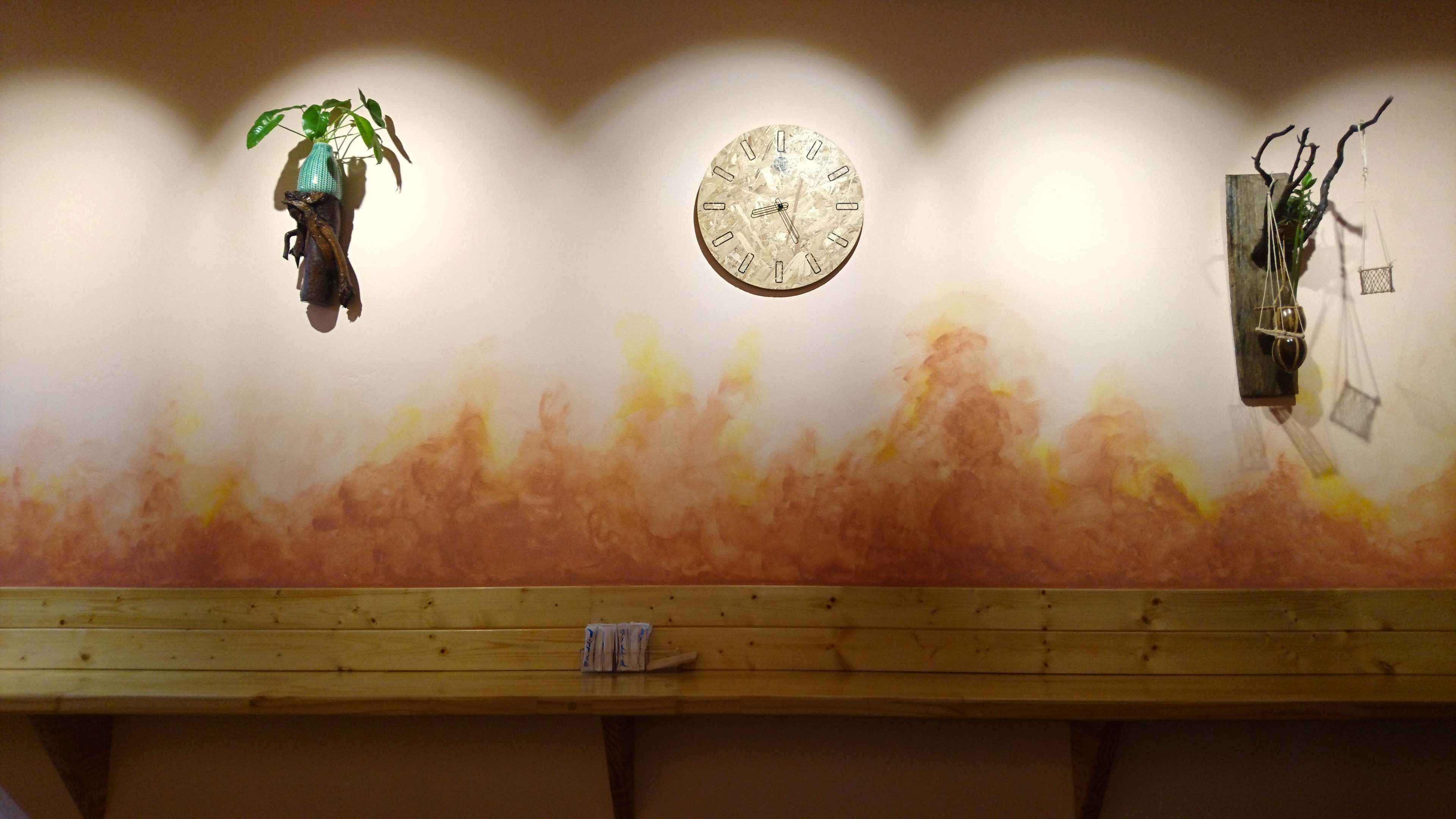 From across the road, The Dip radiates a kind of warmth; it’s got a boutique feel going; you can see the place in its entirety. We venture in; the décor is very homely and kind of ethereal, with a cloudy red and yellow band running in the middle against a soft pink backdrop.

“It has a kind of feminine feel,” Zubi muses. “I wouldn’t have thought they’d serve hummus here.”

“Yeah, I’m getting a dessert vibe from this place,” I say. A sculpture of a branch on which hangs a raabadhi and two joali piques my curiosity. I learn later that it was made by the chef’s husband.

“It’s unpretentious,” says Zubi taking a look around. “This is the sort of place where young love will blossom, you know?”

“Seriously, it’s aimed at young people,” he says. “People under thirty. Younger even. You’ll have to be the adventurous type to come here if you’re over thirty.”

It’s a cosy place with seating enough for fifteen at most. Stools sit at intervals along a long counter and smaller stools are set by tiny square tables. The café is empty but for us and two other guys who’re our age and getting takeaways.

We observe the menu on the blackboards and decide on two combos; the classic and the githeyo mirus hummus. For dessert: a cookie waffle with choco loops and a brownie waffle with marshmallows, all doused in dark chocolate sauce.

Zubi orders a lungo coffee to drink while I get some water.

A few minutes later (the service here is incredible) we dig into the githeyo mirus hummus, scooping it up with our forks.

“Yeah, I love it, it’s not too spicy. And you can really taste the githeyo mirus.”

I have a taste. It’s gorgeous; rich, pungent.

“I think the oil elevates the hummus towards the sublime,” says Zubi. He can get very carried away with these things. 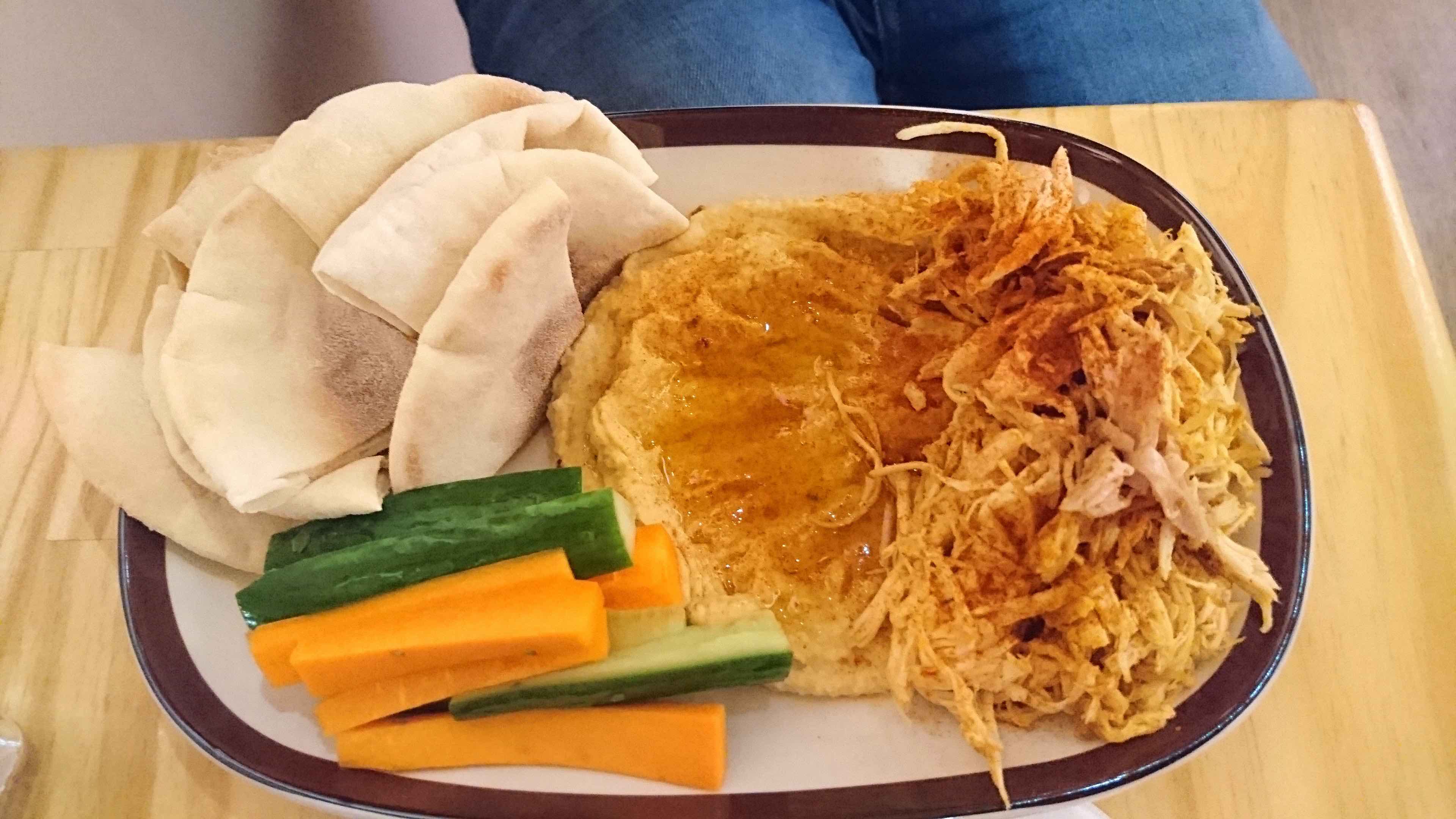 We try the hummus with pita bread next.

“This is fantastic bread,” Zubi says. “Not yeasty and it’s really soft and fresh. Amazing stuff.”

There’s pulled chicken and veggies (carrot and cucumber) on the side. The chicken is deliciously moist, not at all dry as we feared. The veggies are solid; this is an A grade main.

In the meantime, the café has filled up with people who look to be in their late teens.

“There’s a sharing culture here,” remarks Zubi after a spot of peoplewatching. “We won’t look out of place, eating off the same plate.”

“Yeah, do you think they’re students spending their parents’ money? Or do they work?”

We walk up to them and ask a few questions; they’re all in their early and mid-twenties, employed and they enjoy eating out. These guys visit The Dip at least once a week.

“You were right,” I tell Zubi. “It is a place for zuvaanun.” 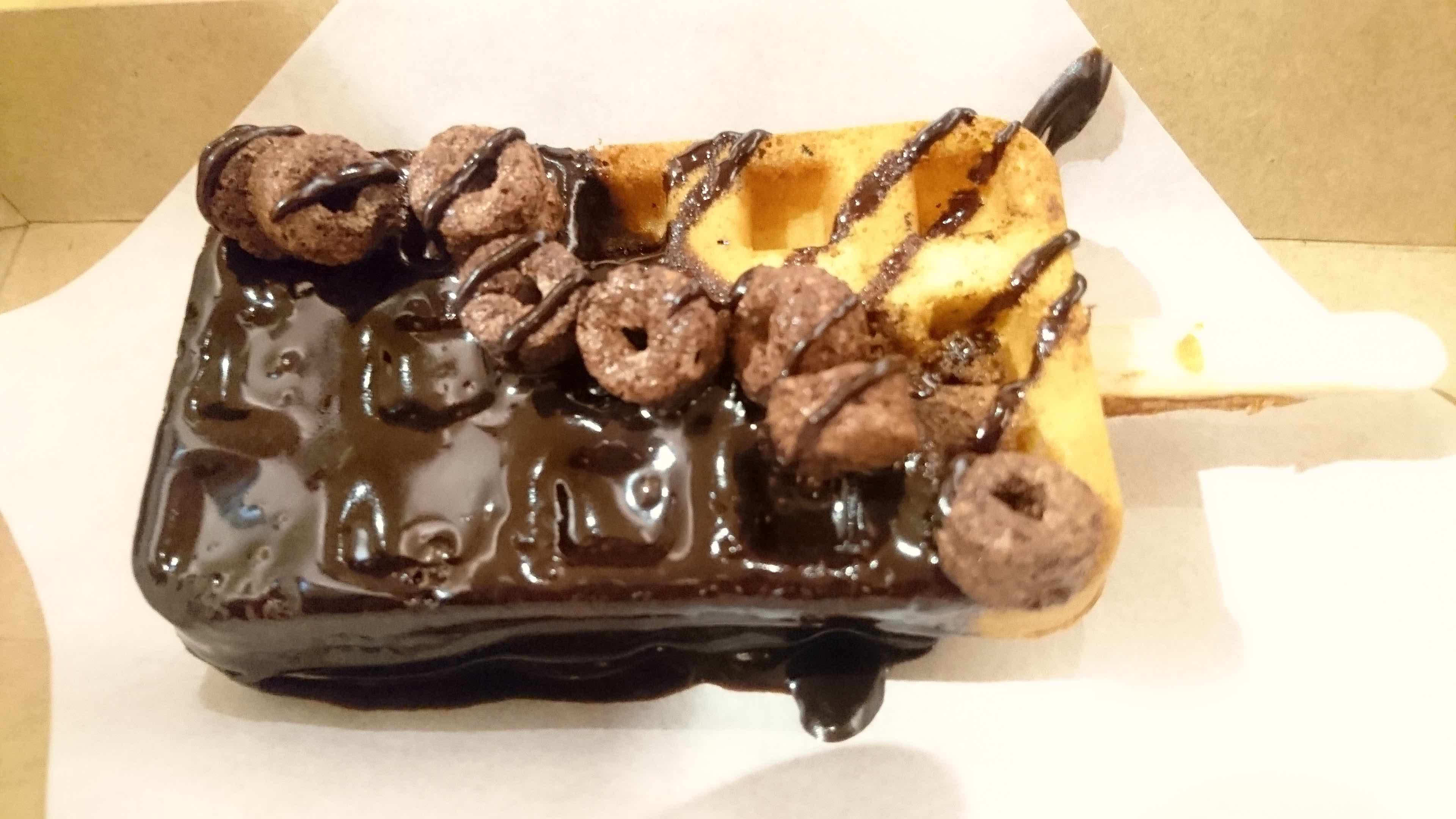 The waffles arrive and are kind of on the small side, they’re snacks after all. My cookie waffle is crisp on top, not too sweet and the chocolate sauce is killer. Zubi’s brownie waffle is sweeter but not overly so. And they’re fresh and warm from the waffle iron. 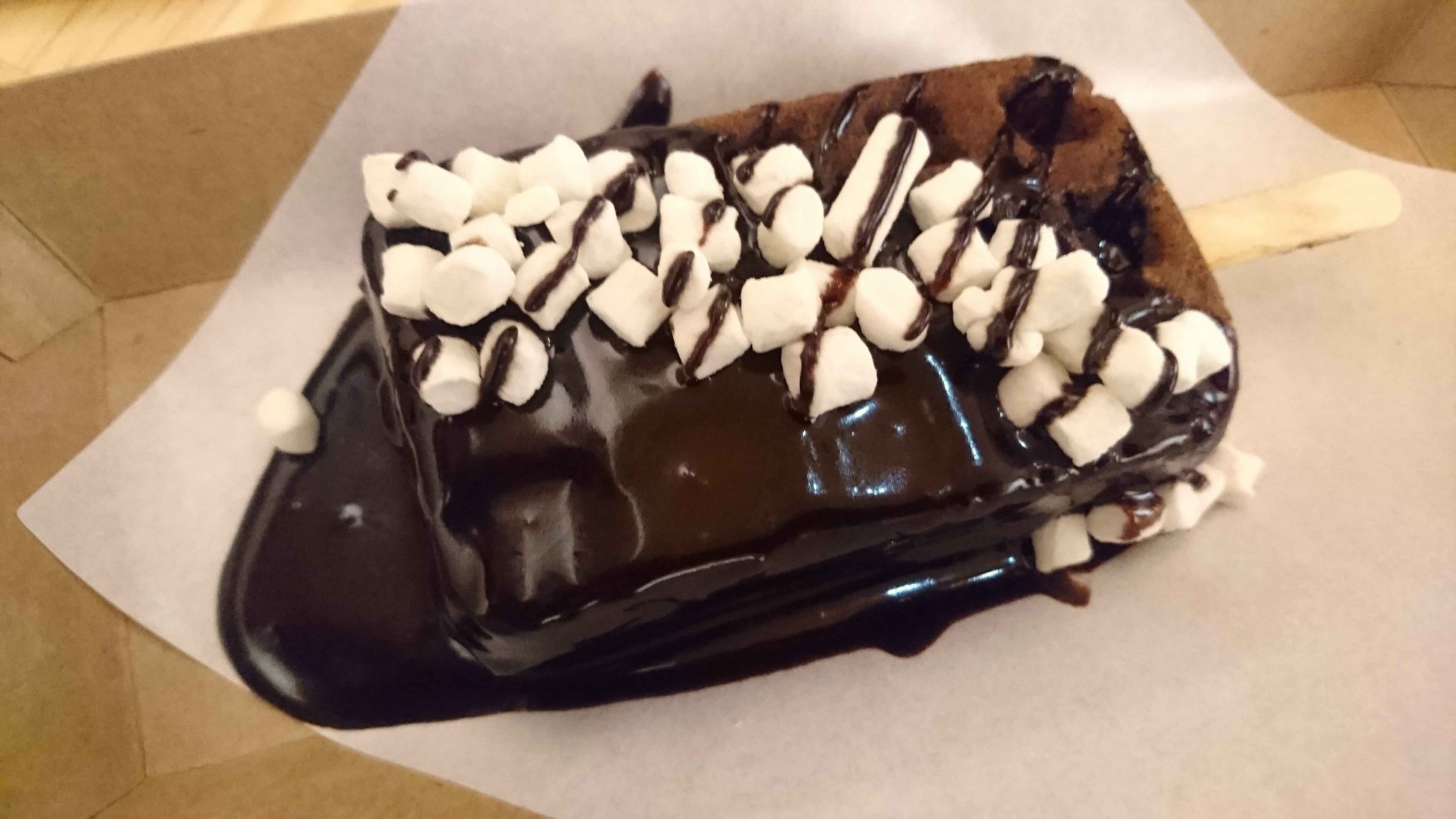 “We should get ice cream,” Zubi says. “Imagine eating something cold with this, think of the contrasting temperatures.”

So we order some. In the meantime, Zubi takes a sip of his lungo.

“I think it’s fine,” he says. “Good acidity, certainly better than Lavazza from most cafes, and it’s cheaper.”

Our ice cream arrives before the waffles lose their warmth. And Zubi’s right. It really is beautiful, this juxtaposition of temperatures and textures.

When I go to the counter to pay for the ice cream, the chef says it’s on the house.

“You must put that in,” laughs Zubi.

“They’ve created a niche,” he goes on. “Specialising in a couple of things, and they do it really well. It’s very smart. I never expected this.”

I’m sold too. The idea of pairing hummus and waffles doesn’t seem half as odd now.

The jury is unanimous, guys. We have a winner in The Dip. And no, the ice cream wasn’t a bribe.

Expect to spend about 160MVR per person with drinks and dessert or half that if you share.