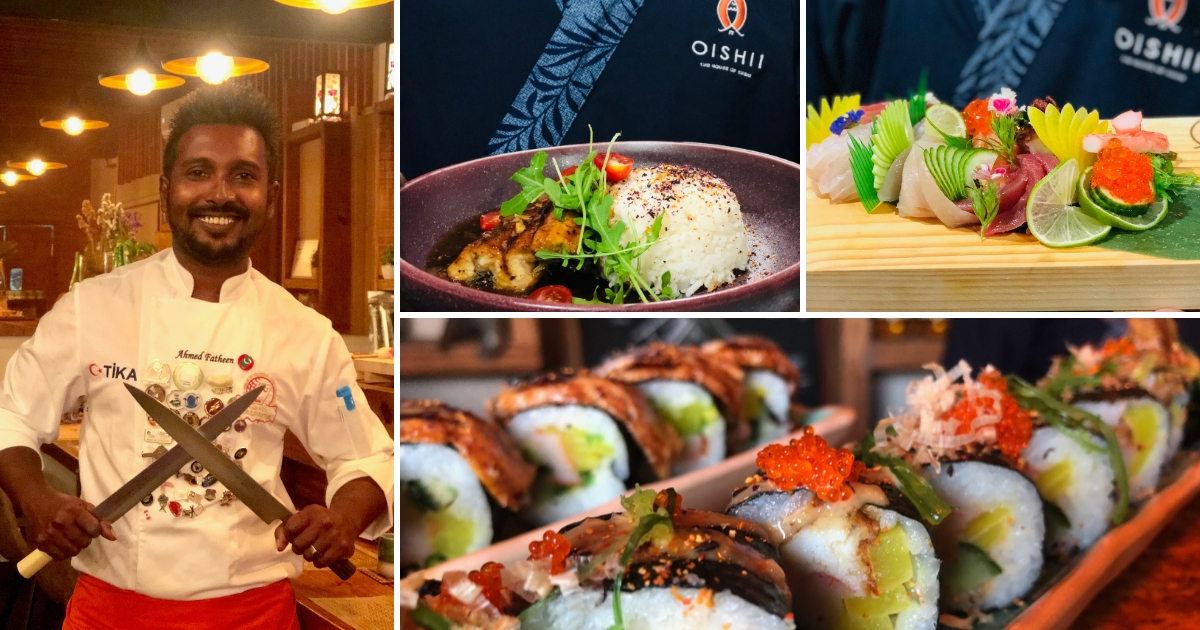 When I turn up at Hulhumale’s Oishii Saturday afternoon, Fatheen is busy making ramen from scratch, a first for the restaurant. Nests of noodles rest in a plate next to him, and he flattens a ball of dough and puts it through a machine. “I put a bit of salt and some miso flavour into it,” he says. “It’s not typical but it’s something I want to try out.” 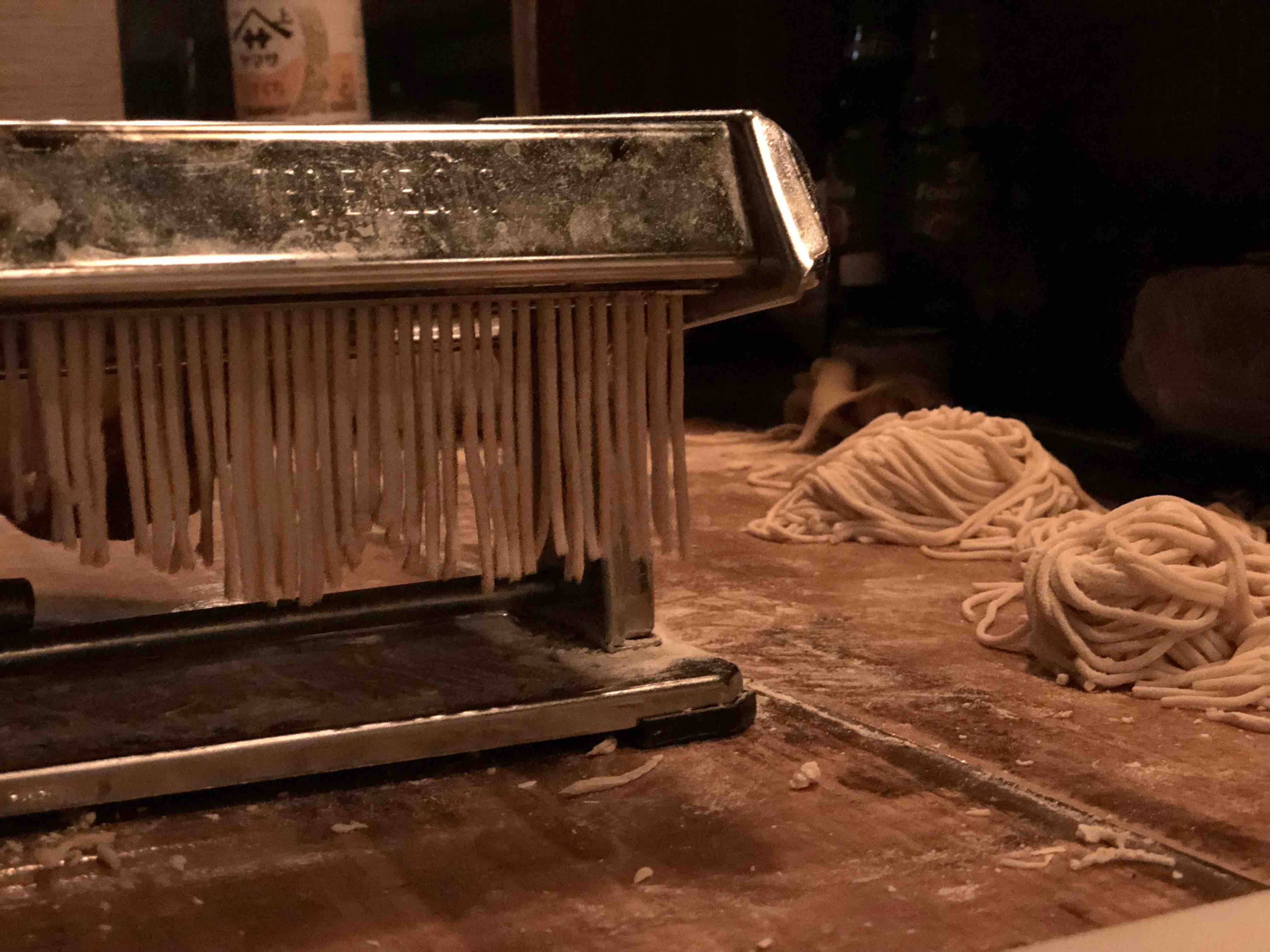 It’s about five and customers have begun to pour; there’s a group of Chinese, two Japanese men and a local couple. A busy day, as weekends often are, but Fatheen takes some time off for a little chat. 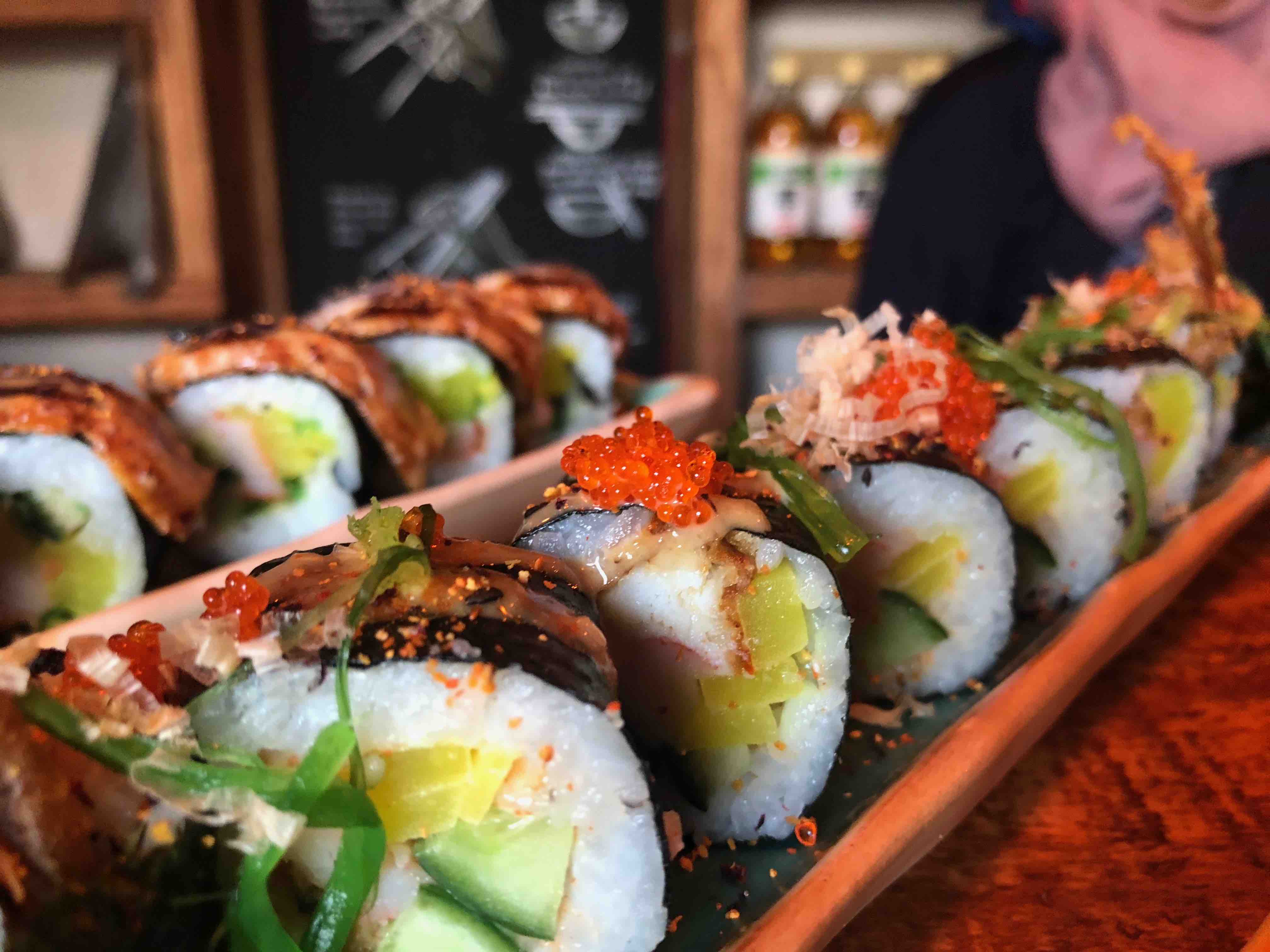 Lonumedhu: Let’s begin with your interest in Japanese cuisine. Of all the cuisines in the world, why Japanese?

Fatheen: Well, it’s a long story. In 2004, when the tsunami struck, I was in [Four Seasons] Kuda Huraa doing an apprenticeship programme in culinary arts. The best of us were given an opportunity to work at Landaa Giraavaru.

I really had no idea what sort of cuisine I wanted to specialise in back then. I was too young really. So, in Landaa Giraavaru, I was working at the Italian restaurant initially but about a year into my stint there, the chef at the teppanyaki restaurant quit. And the kitchen didn’t have a replacement. Plus, they were finding it hard to get a person from abroad, and meanwhile, the restaurant had to keep going. Now, I’m a very positive guy, so the head chef came one day and said ‘If you’re eager to learn, we can bring a Japanese chef to train you, then you can man the teppanyaki restaurant.’

I thought it was a good idea actually, Japanese cuisine is important and if Four Seasons were willing to train me, why not, eh?

Fatheen: So, yeah, that’s kind of where my interest began. But my trainer was extremely strict. I had to follow recipes and instructions to the letter. Absolutely no room for error, you see? It was so difficult at first. There were days when I’d cry because the chef would scream at me.

Fatheen: Yeah, honestly. He wasn’t an ordinary chef though. He was licensed to prepare fugu (puffer fish), and not just anyone can do that. You could kill thirty people with one of those things. Anyway, I believe my time with him was very important for personal growth.

Lonumedhu: Did you do any other training?

Fatheen: Yeah, about three years later, I went to Whistler, Canada on a Four Seasons training programme. I was there for three years and learnt more about Japanese cooking. Then, after a few years, I got to spend some time in charge of the kitchen in Naladhu. They had a mix of everything there, different sorts of cuisine, including Japanese. That was an eye-opening experience.

Lonumedhu: Yeah it must have been. Anyway, Japanese restaurants have had bad experiences in Male', it seems very risky to start one up. Oishii closed down too for a while, not long after you opened up at the previous location.

Fatheen: I was working at the time, and I didn’t want to perform poorly at work. So, I worked at Oishii on my days off. But it wasn’t going the way I wanted and I didn’t want a place that I was involved in to go to the dogs. And I didn’t want to keep on working in resorts either. I really wanted to have my own business. So, after shutting the place down, my girlfriend Shifu and I just talked a lot about the restaurant, what we wanted it to be etc, and worked in resorts and saved up. Shifu has a degree in culinary arts, she knows food trends and stuff, whereas I have a lot of practical experience. Between us, I think we make a great team. And here we are. I’d say any business is risky but I’m really thankful that we’re getting the support we need from our customers.

Lonumedhu: Speaking of customers, what’s your client base like? Do you get more locals or expats/tourists?

Fatheen: Well, surprisingly, most of our customers are local! I’d say about 65 per cent. But in a sense, it’s not too surprising because Maldivians travel a lot these days. And I can tell they’ve had Japanese food before. They’d tell me differences in what they’ve had previously and what they get here. 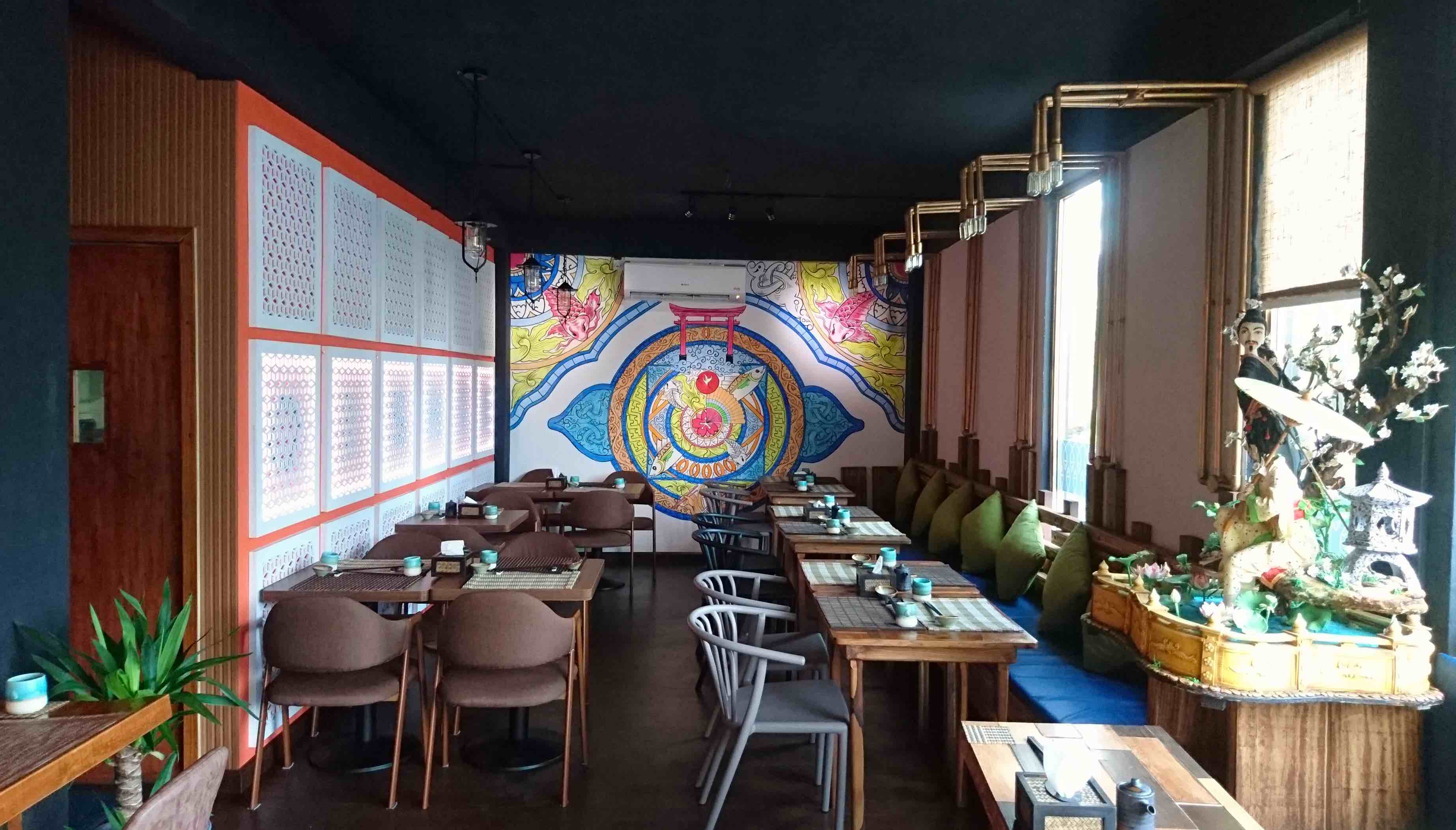 Lonumedhu: Also, I want to say that I really like the décor here.

Fatheen: Thank you. It’s a funny story actually. We had an interior designer make something for us but it wasn’t specific to this location. Once we saw this place, we kind of did it on our own. I put my drawing skills to practise and, with input from Shifu, just drew the whole place up. That mandala-like thing on the wall, that’s not me though. We got a local artist called Thoriq who works at Lonufen Studio to do that for us.

Fathheen: I actually coloured some bits because the artist just drew those without colouring.

Lonumedhu: That’s great. So, what’s next for Oishii?

Fatheen: We’ve got a few things planned. We’d like to have a teppanyaki area in the restaurant and also do really special plating. I have some ideas on that. I used to do plating showing off different concepts, like I’ve done plating that resembles fish and coral, instantly recognisable features of the Maldives. I think that would make a great addition. And molecular gastronomy, like using liquid nitrogen, making soups like popsicles. These are some of the things I’ve had in mind.

Lonumedhu: Awesome. Hopefully you’ll get to do all that and more. Thanks a lot for the chat Fatheen. 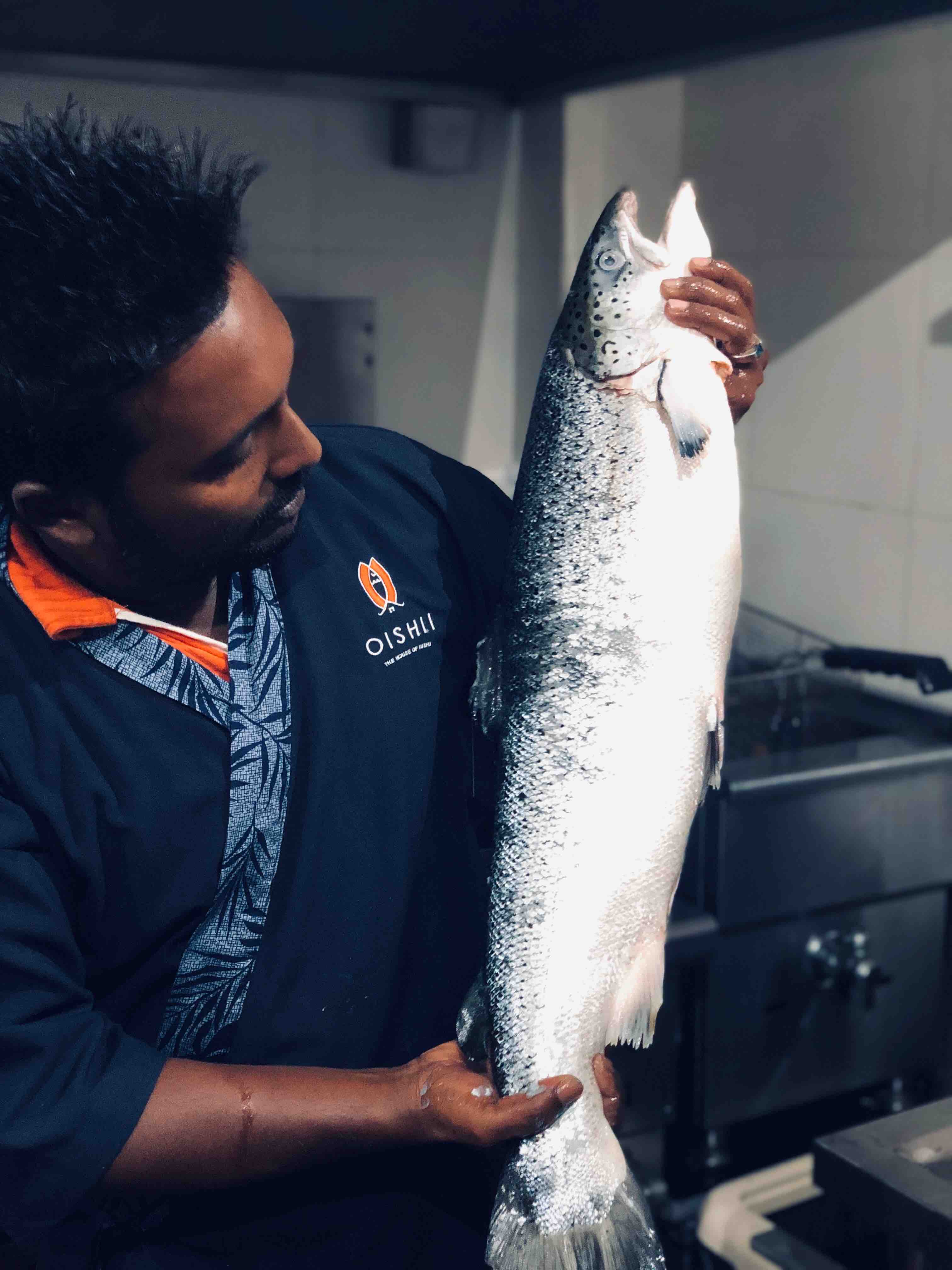