I yam what I yam | Lonumedhu
Skip to main content

I yam what I yam 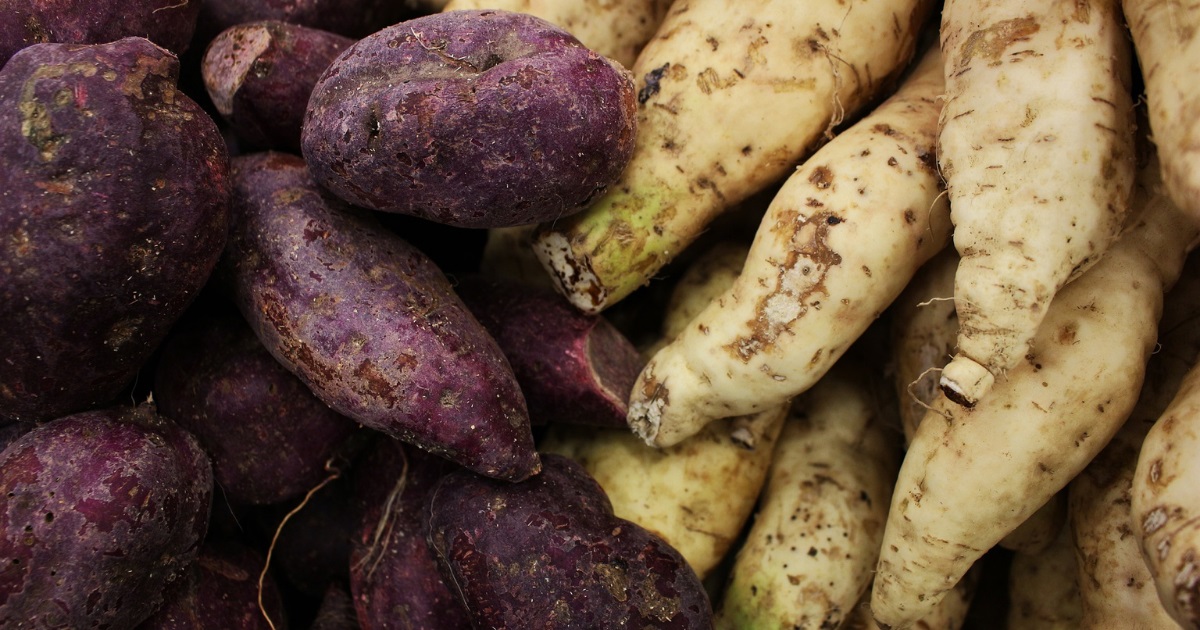 There’s a lot of confusion around yams. Depending on where you are in the world, taro, cassava and sweet potatoes could all be mislabeled as yams. Americans might refer to sweet potatoes - those gnarly vegetables with orange flesh - as yams whilst in Portuguese-speaking countries as well as in Malaysia and Singapore, taro is called yams.

To add to the confusion, the names for taro in Latin America (Ñame or Malanga), Brazil (Inhame), Hawaii (Kalo), and the Philippines (Gabi) are all translated as “yam” in English. Like yams, some taro are purple on the inside, but they all are brown and scaly and rough on the outside.

Let’s clear up the confusion.

Yam is the common name for some plant species that form edible tubers. Yams are perennial herbaceous vines cultivated for the consumption of their starchy tiers in many temperate and tropical regions.

True yams are botanically distinct from the sweet potato plant. In fact, these two starchy tubers are in different and not even closely related families. Sweet potatoes, which come from the morning glory plant family, are typically orange or white inside and are indeed true roots, like carrots or beets.

There are many cultivars and related species of yams and sweet potatoes. But both tuber crops were largely displaced by the introduction of cassava. Also grown in the tropics, it is estimated that millions of people consume cassava in their diet. Cassava is one of the main sources of carbohydrates in most tropical countries. It provides more calories per gram than any other tuber, but it must be eaten cooked to eliminate natural toxins in the root.

Here in the Maldives, all root vegetables are classified as fala madi. 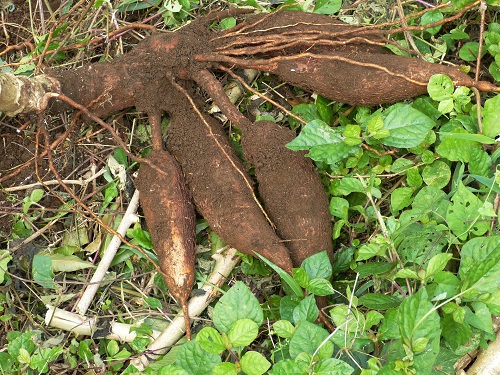 Yams or ube are called kurukuru in Dhivehi. Its skin is typically brown and rough like tree bark, with starchy flesh. They vary in taste from sweet to bitter to tasteless. This tuber tends to become slightly slimy like okra when cooked. In the past, the yam cultivation season was quite the festive occasion. Baked yams were also eaten as a staple instead of rice in the olden days. Wrapped in banana leaves and placed in the fire pit, the tubers become soft and take on a smoky flavour. It was served with garudhiya, coconut, limes and chili. Although we don’t see it much now, kurukuru bondibaiy, a simple pudding flavoured with pandan and jasmine water was enjoyed during the yam season. 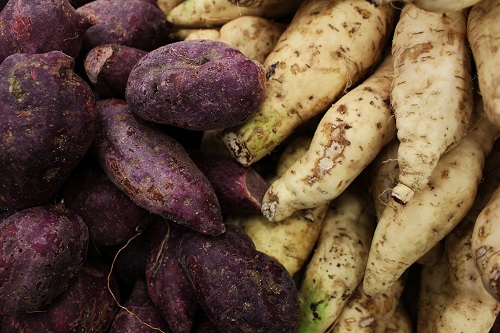 Named kattala in Dhivehi, they are sweet with softer flesh than regular potatoes. Boiled sweet potatoes are a great addition to rice and garudhiya meals. It’s eaten with scraped coconut and sugar as well. Sweet potatoes are also roasted and candied. And they make for a sweeter mash than regular potatoes. In the past, a special pudding called kaliyaakuri kattala, made with coconut milk and coconut sugar, was enjoyed as a late-night meal during Ramadan. Kattala metaa, a hard candy made with sweet potato pulp is a specialty from the southernmost islands. Sweet potato leaves are cooked as a vegetable to make curries and stir-fries as well. 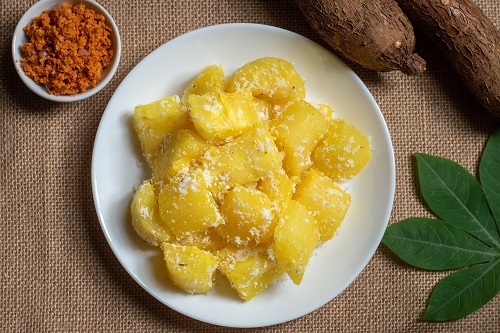 Also called yuca, manioc or tapioca root, cassava contains more calories, protein and carbs than sweet potatoes. But it can cause cyanide poisoning when prepared improperly or consumed in large amounts. Cassava should be detoxified by soaking and drying, and scraped before consumption. The leaves are edible if cooked or dried but should not be eaten raw.

Tapioca is the extracted starch, while cassava flour is made from the entire root. Tapioca is often used as a thickening agent or to make puddings.

It’s used in both savoury and sweet dishes. The most popular cassava dish is dhandi aluvi boakivaa, made with coconut milk and sugar. Although not very common now, cassava pudding and porridge were quite popular in the past. Cassava tastes delicious roasted, too. 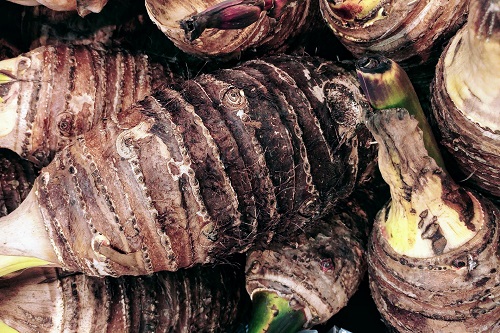 Taro is a perennial starchy tuber. Named ala or olhu ala in Dhivehi, there are many varieties grown in the Maldives. Taro is most often eaten boiled. In several cuisines, taro is boiled and mashed like potatoes. It can be roasted after boiling as well. Ala naarovah faludha, a sweet made with rice flour and coconut syrup is a specialty from the South. Ala dhagan’du fathafolhi, a savoury pancake made with grated taro and rihaakuru is a specialty from Fuvahmulah. Thinly-sliced fried taro chips are a classical Maldivian snack.

Once cooked, taro has a pasty consistency. You can use it to make a variety of dishes like hearty soups or gluten-free bread and fritters.

But bear in mind, taro can irritate your skin so wear gloves if you are sensitive and wash your hands properly after cutting. 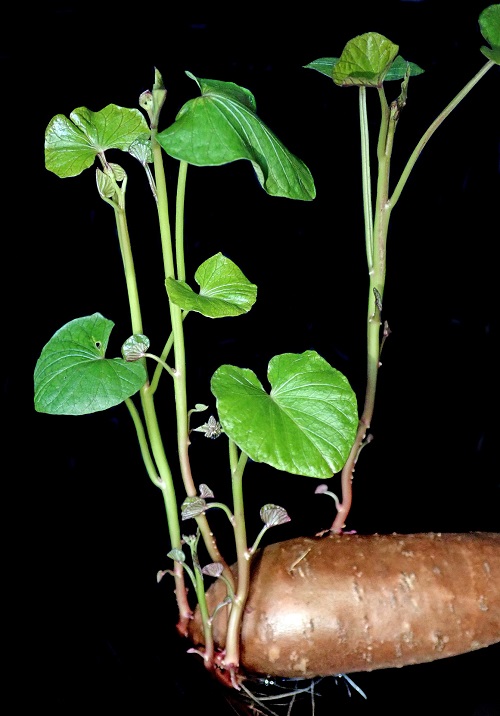 These versatile fala madi varieties are loaded with carbohydrates, fiber, vitamins and minerals. They can be used to make filling and healthy dishes, and the possibilities are endless.