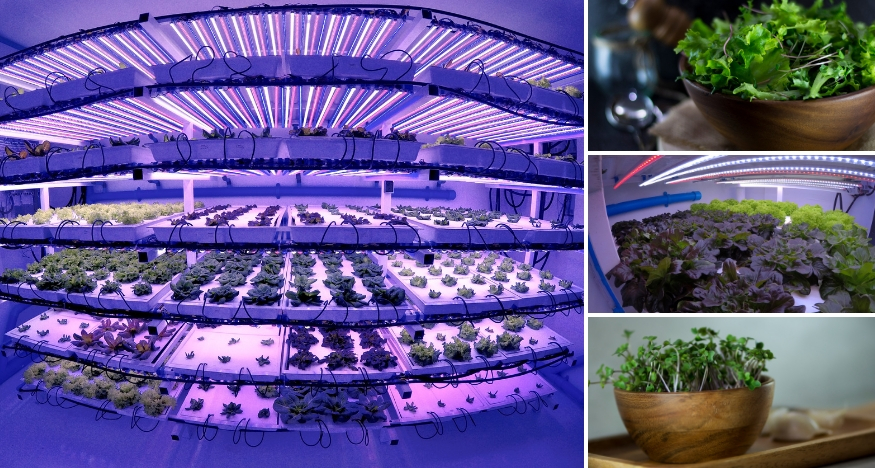 Guys! Who among you digs the idea of having a farm in the middle of the city? Imagine a secluded green space amid this urban jungle, like your own little green secret walled off by concrete. Well, guess what? Turns out someone’s already had this idea AND they’ve put it to action. Meet Habitus Fresh (habitusfresh.com), the company who’s built what they call the Maldives’ first ‘vertical urban farm’. And it’s no secret anymore. Right now, they’re producing several kinds of lettuce and salad mixes and microgreens on their farm on Nikagas Magu. The company’s retail outlet is close by at the pink TATA flats on Majeedhee Magu. We couldn’t visit the farm because it’s a controlled environment; there’s minimal contact between us humans (who’re full of bugs) and the plants, thus there’s no need for pesky pesticides. So, Lonumedhu sits down with their chief executive Ismail Shukree and chief operating officer Hamid Saleem to get the deets on this operation.

Lonumedhu: It’s a pretty wicked idea, to be honest. How did you guys come up with it?

Shukree: It was about a couple of years back, and it started as a conversation among friends, two of whom are here, including myself. We explored various business opportunities and this topic [urban farming] came up. And the deeper we went into it, the more attractive it seemed. And then we decided ‘yes, let’s do this.’

Lonumedhu: Did you see a market for it initially?

Shukree: Yes, we did see opportunities, gaps that we could fill, in terms of freshness and availability. We realised that there’d be challenges in terms of operating costs, in bringing something new to the market, a relatively small market but still of a reasonable size all the same.

Lonumedhu: So, who buys your stuff mostly? Is it restaurants or people like us?

Shukree: Our primary focus has always been retail customers; individuals who’ve been complaining for years about how bad the produce is here [laughs]. The majority of the produce is imported so there are logistical issues in ensuring freshness. And yes, we cater to restaurants and work with resorts as well.

Lonumedhu: And how do you select your seeds? What do you look for?

Shukree: We only go for non-GMO, or organic certified seeds. We do that to maintain quality. We’ve been improving our process over the past year; it’s an ongoing learning process. And we’ve also been trying to minimise our waste.

Shukree: As in produce we have to throw out. Stuff that doesn’t come out properly, so we try to minimise that as much as possible through quality seeds.

Lonumedhu: And why did you choose to go non-GMO and pesticide free?

Shukree: Well, we prefer to think of what we consume and what we give consumers as clean and organic as possible. One of the things we get asked most is ‘why don’t you have organic’? Technically, when we started Habitus Fresh, it wasn’t internationally approved as an organically certifiable model in terms of hydroponics but we choose our raw materials consciously and ethically.

Lonumedhu: Also, do you think the amount of energy and water consumption is sustainable for an operation like this?

Shukree: Realistically speaking, for this business model you have to have scale. And that’s something we’re focussing on – expansion. We need to achieve scale to be sustainable. We’re using traditional modes of energy but we’re looking into alternatives, viable alternatives.

Lonumedhu: Do you see your business expanding in the near future?

Lonumedhu: Oh, and before we wind up, what’s your most popular type of produce?

Shukree: Salad mix [laughs]. It’s not something we came out with initially. We introduced it a few months after we started and it’s very well received by individual customers and even some restaurants. We’re also looking at expanding our offering in terms of local availability because we’re very passionate about supporting local produce, being producers ourselves.