Now, in case you’re a fan, a Bread Matters outlet popped up in Male' opposite the Kaanivaa entrance, at Gaadhoo Building. Rejoice, fellas. Dubbed Bread Matters Urban, expect a city vibe when you walk in. It’s a wee bit hot inside though, despite the air conditioning, and I’ve been through its glass doors a couple of times.

The interior’s bright and fresh, and the aroma of bread and pastries linger in the air while more pungent cooking smells are kept at bay thanks to a well-positioned kitchen. There’s your pastries, bread and dessert counter beneath filament bulbs; it’s a look tried and tested elsewhere, but it fits the purposes of this restaurant quite well. The wall art features headshots plus quotes from people ranging from Einstein to Marlon Brando. Given this cosmopolitan setting, and with an equally diverse clientele, you might be forgiven for thinking you were in Singapore. I think the place needs a local touch somewhere; perhaps replace Marlon Brando with our own Yousay. Or something.

Anyway, I’ve had their chicken rice and it’s a mother of a meal; I’d recommend the dish without reservation; the homemade chili paste was extraordinary, adding a welcome dimension of heat, and the sweet soy sauce was right on the mark. The chicken was flavourful but could have used a little more tenderness.

This time, though, my friend Lulu and I are in different worlds; she wants fish and chips and I want something closer to home, like chicken curry. We order a Mexican appetizer, chili con carne with nachos. Between us, we’re sampling the culinary offerings of three continents.

The orders arrive quickly, Lulu gets a drink, a passionfruit mojito.

“I like it,” she says after a long sip. “Fruity, sweet, it’s in that goldilocks zone.” 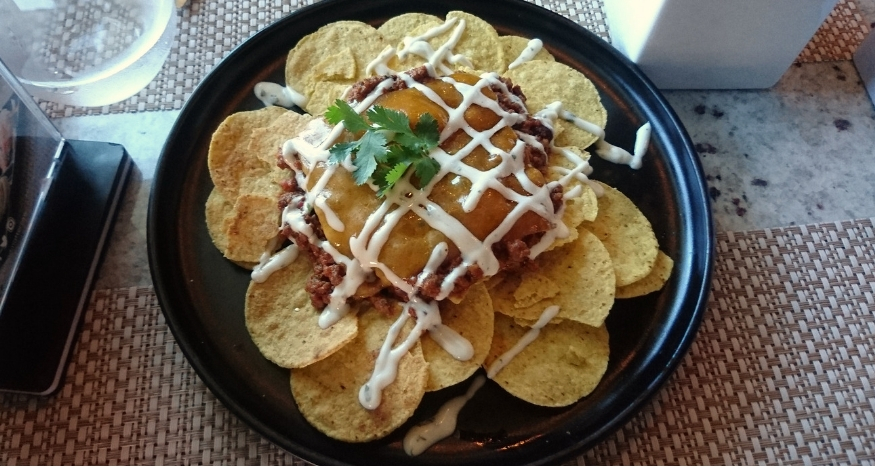 Then we dig in to the nachos. They’re a tad disappointing because the cheese slice on top hasn’t melted all the way.

“This has got to be the first time when eating nachos with a fork’s been easier,” she remarks.

“I think it’s quite good actually,” I tell her. “Apart from the cheese.” 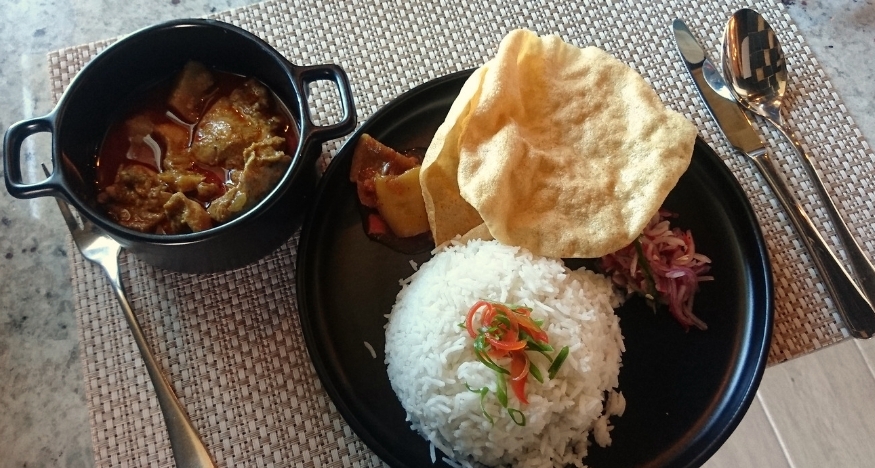 We move on to our mains. The chicken curry is fragrant, there’s quite a bit of meat. I have some with my rice.

“Wow,” I say. “It tastes kind of exotic, not what I was hoping for but still, really good.”

“Gimme a bite,” she says, picking out some rice and chicken with her fork.

“It’s the lemongrass,” she says. “That’s where the exoticness is coming from.”

“Yeah,” I say. “It’s fantastic. Well cooked, the chicken, it’s really tender. The gravy’s just beautiful, soupy and not too spicy, it’s got a really nice cumin flavour. And I’m really digging the eggplant, by the way. How’s the fish and chips?” 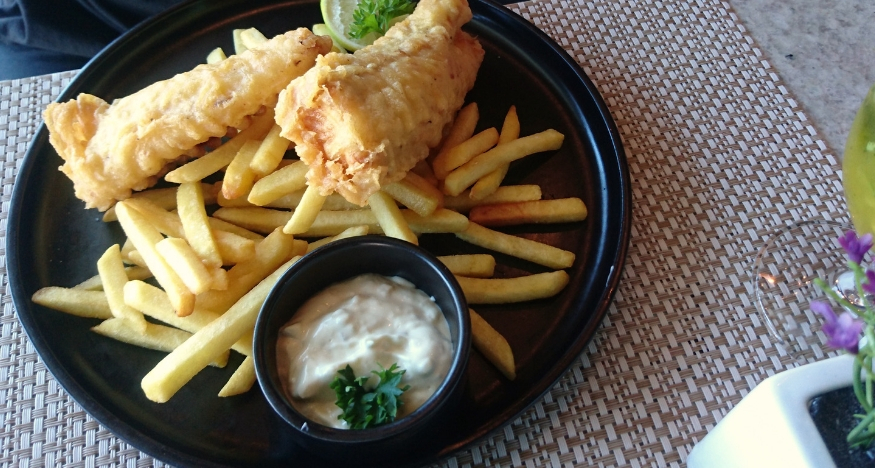 “I’m supposed to get mushy peas with it,” she says and calls a waitress and explains the situation. They take a while coming but when they arrive, the peas are stellar.

“Mushy peas are the best!” she exclaims.

“How’s your fish and chips?” I ask a second time.

“I really like it on the whole though the batter tastes just a teensy bit oily,” she says. “But the chips are awesome, and so’s the fish. And it’s super good when you take a bite of everything together.”

For dessert, we grab some chocolate mousse from the counter and return to our table. The mousse is cool and rich with a firm texture.

“Someone knows how to do proper mousse,” Lulu grins.

“Totally,” I say and sink back into my cushioned seat. That’s another thing, the seats here are extremely comfy. I take a look around, it’s pretty crowded but the tables have a fair bit of room between them; there’s a feeling of spaciousness here that some cafes of similar size lack, especially when they’re this thick with people.

We parted with about 400MVR for everything, and that puts it up there with Seagull and Shell Beans, money-wise. It’ll take a little while for BM Urban to fulfil its potential, I think, but even as it is, it’s a promising contender. They’re ironing out the kinks at this point, and that’s to be expected. It also means you get discounts on selected lunch items, like the chicken rice and lasagne, both of which were brilliant. Methinks it’s a good idea check yourselves in before the restaurant settles down and ups its game (and prices).