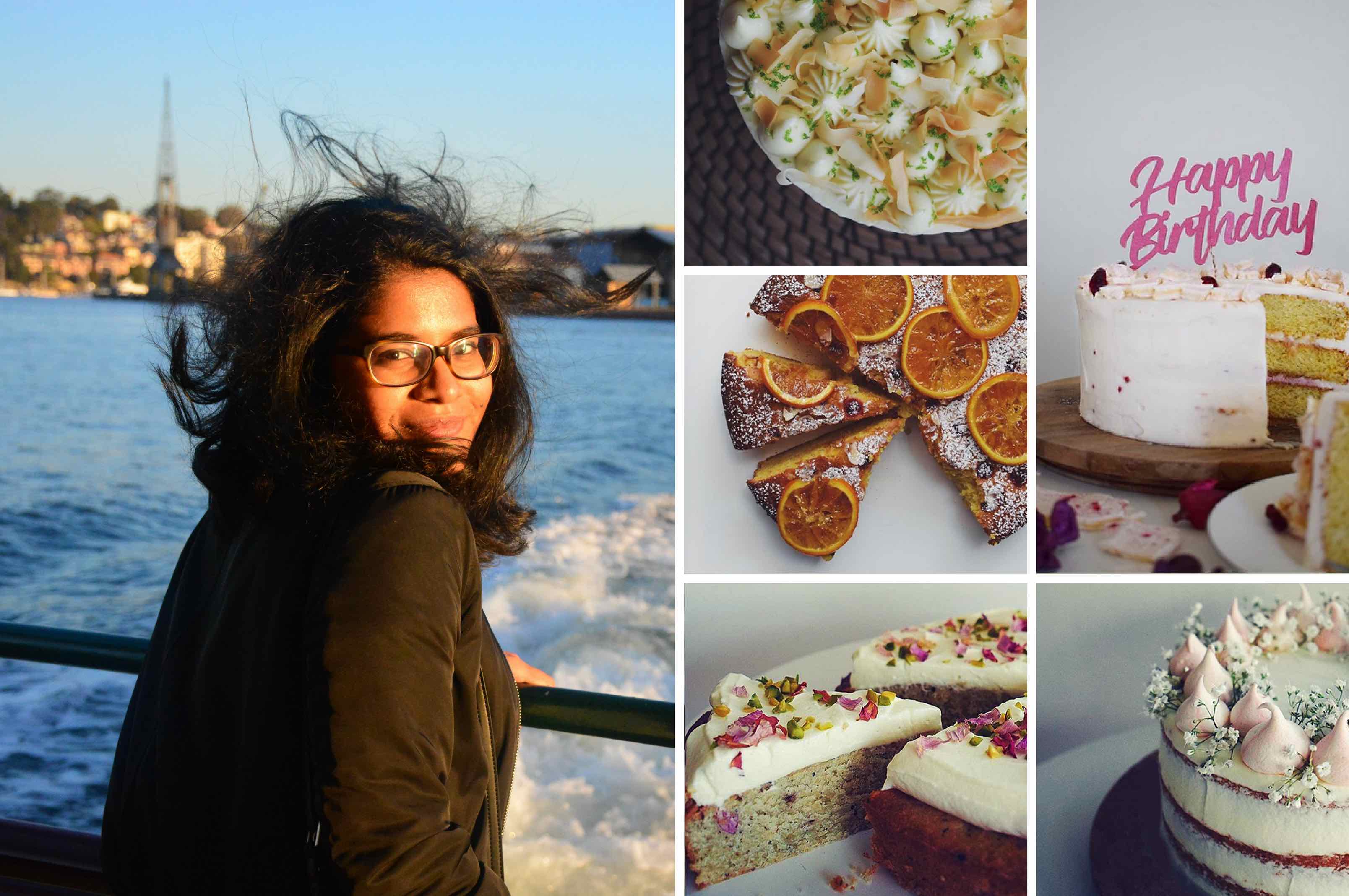 So, have you guys heard about BAKED by Nau? In case you haven’t yet, it is an online bakery run of course by Nau; and if you have a look at BAKED by Nau’s very pretty feed on Instagram your eyes will thank you and it’s possible that you’ll crave cake.

We caught up with Nau to have a chat about her baking business. We talked about a lot of things including how she got into baking and her unusual flavour combinations, all of this you would find, if you keep on reading. We also spent a good ten minutes discussing eggs. We are going to spare you the details, but let us tell you that we agreed on this: eggs are great.

Lonumedhu: Let’s begin by talking a little bit about your cake flavours. Black pepper in a cake, I think that’s rather unusual. And I saw that you use plums, rose water and cardamom as well. Where do all these come from?

Nau: I studied Culinary Arts at Sunway University, Malaysia, and specialised in patisserie from Le Cordon Bleu, Sydney, Australia. While I was studying, I tried to visit a lot of cafés and restaurants to see what the latest trends were, and also to try out new flavours and incorporate whatever I liked into cakes, whether I was inspired by a drink or another dessert. I am also always looking up recipes both online and in books to see what flavours go well with each other.

Lonumedhu: Usually I see cinnamon in desserts and cakes, but I honestly hadn’t imagined a cake with black pepper.

Nau: I believe vanilla and strawberry compliment each other a lot, and it’s a pretty common flavour, so I wanted to elevate the flavour by adding the black pepper. This cake was actually inspired by a drink I had. I find that people are a bit hesitant to order the Birthday Cake (in case you are wondering, it’s the name of the cake with black pepper on Nau’s menu) because of the black pepper, so I always advice them that it’s actually not that spicy, as the sweetness from the frosting, the cake and the strawberries really does cut off the spiciness of the black peppers.

Lonumedhu: Okay, I want to talk some more about using spices in baking, but right now I want to ask you about pastries. You’ve mentioned that you specialised in patisserie, yet your menu for now is mostly focused on cake.

Nau: Yeah, I started in January this year, so for now I am focusing just on cakes, but I am planning to expand the menu and include other products as well, both savoury and sweet.

Lonumedhu: I’ll look forward to that! Your studies also included cuisine right?  Tell me more about that.

Nau: Yes, I had to work in the hot kitchen, handling poultry and making stock. I would say that I wasn’t that interested in that part; I found myself leaning more towards desserts.

Lonumedhu: Since you mentioned poultry, did you have to truss a bird?

Nau: Yes I did and I had to descale large fish as well, that was quite interesting.

Lonumedhu: So, using spices in baking, why are you drawn to that?

Nau: Spices are really fragrant, and so just a little bit of spice can make even the most ordinary of cakes interesting. I also try to include different textures in my cakes; for example by adding a filling and crumb layer. It just makes the cake more fun to eat.

Lonumedhu: Speaking of spices, have you ever used cumin in a cake?

Lonumedhu: Fennel sounds interesting; I like ginger in bakes too.

Nau: I have actually been working on a cake with ginger as well. I am trying to introduce new flavours quarterly so in September I will hopefully put out a cake that’s either incorporated with ginger or fennel seeds.

Lonumedhu: Is it difficult to get ingredients from Male’?

Nau: Yes, that’s the most difficult thing about it. When I first started off I used to buy ingredients separately for every order but then there was the problem of shops running out. So now I buy them in bulk.

Lonumedhu: I think our readers would like to know how you got into baking. Shall we talk about that?

Nau: I don’t think I remember exactly how I got into baking but as far back as I can remember I always loved it and received a lot of encouragement from my parents, they’d be buying me cookbooks and ingredients. When I finished my high school I took a gap year to work at a desk job and I realised it just wasn’t for me. That’s when I decided to go forward with my passion and studied in Malaysia and Australia. I was required to do internships in both countries and I believe this helped a lot as I got to meet top chefs working in the industry and café owners who gave me a lot of advice, not only about the techniques, but also about the latest trends and how I can advance myself, which I will always be thankful for.

Lonumedhu: So who’s your baking inspiration?

Nau: When I first started I don’t think I had any. Nobody in my family was that particularly interesting in baking so I really don't remember how I got into it.

Lonumedhu: Really? Perhaps you saw something on TV?

Nau: No, when I was growing up cooking shows such as MasterChef weren’t around, but now I do have a couple of chefs that I follow religiously on Instagram.

Lonumedhu: Are you into baking shows?

Nau: When I was studying abroad I loved watching MasterChef. Now I don’t watch it as much, but I did watch the Chef’s Table Pastry when it came out.

Lonumedhu: Okay, so last question, what’s the most challenging item on your menu?

Nau: I wouldn’t say challenging, but the cake with the most elements to it is the S’mores cake, and I like to spend at least two days on it.

Lonumedhu: That’s it, thanks so much for taking the time to have this chat; I really had a good time.