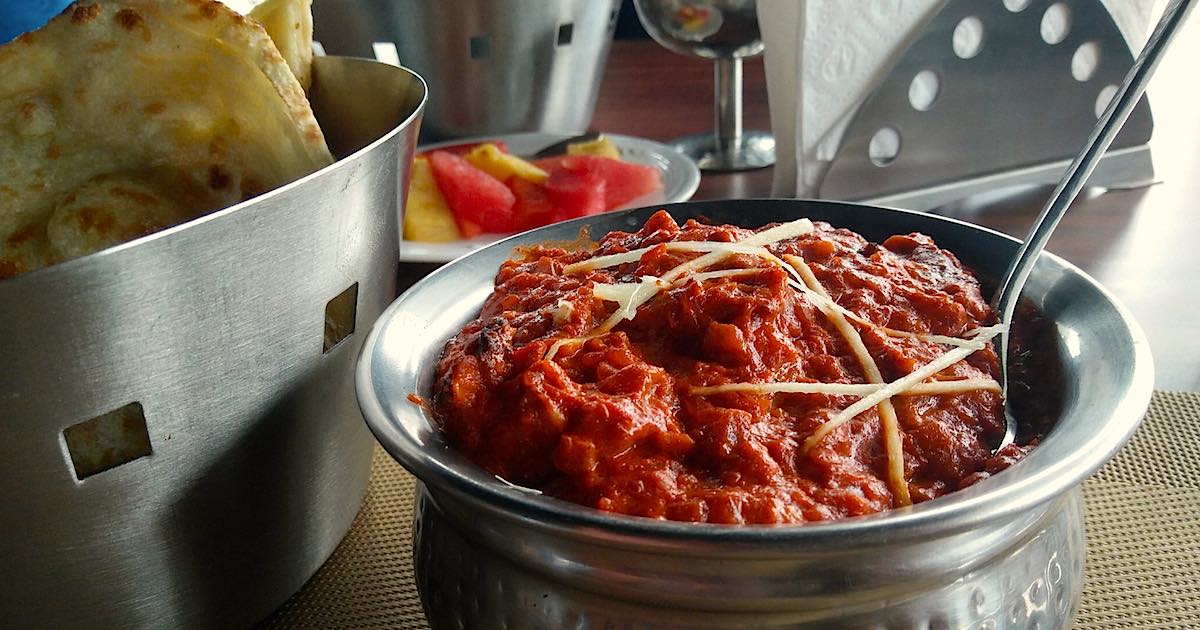 As you might already know, the Indian franchise Moti Mahal has landed in the Maldives. They’ve got over 150 restaurants around the globe, their speciality is North Indian cuisine and they’ve been around for almost a hundred years. All of this, has of course, made us very excited.

Moti Mahal Maldives is located at the first floor of the Rasfannu Pavilion and climbing up the stairs my friend and I are greeted with the aroma of spices, which we decide is a fair indication of the good things to come. But that’s not all we are greeted with; tall walls with blue and white intricate Indian patterns, wooden doors, stark black borders; we think the place looks a bit majestic. 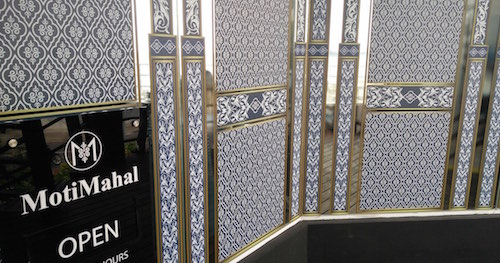 It was lunchtime, and on our way to the seating area, we pass their buffet spread, which we decide is what caused that lovely greeting to our noses. Inside, a waiter guides us to our table, our chairs are large and cushiony, and we have a nice view of the ocean through the glass windows.

We decide that we should check out both the buffet and the a la carte menu. As my friend headed back outside for the buffet, I look through the extensive menu and with a little help from our waiter order a chicken tikka masala, a butter naan and a masala chai.

My friend comes back with a plate full of curries and a dessert. “They are bringing my butter naans,” he says. “Oh, and there was biriyani” he mentions while telling me that he’s not in the mood for rice but that he got all the chicken curries available there on his plate.

Promising to give him some of my tikka masala, and agreeing that we’d order more naans if we run out, I get myself a little taste of what he is devouring.

I fall in love with the balti imli chicken’s tangy gravy, I decide the dhal makhni is one of the best I’ve had in a long time considering I can’t recall one with that much flavour, but it’s the drums of heaven chicken that really, really got me wishing I had gone for the buffet lunch. Also, the naan is not the usual thick piece of undercooked white dough you get from some places in Male’. It’s got a good amount of butter on it; it’s very well made and crispy on the edges.

“This is an actual feast,” my friend tells me, as the waiter finally gets me my order. I take a sip of my masala chai, it’s good, nothing to complain there, and we dig into the chicken tikka masala, which at this point delivers what we expect, great pieces of tender chicken in a killer gravy.

We ask for the bill as we finally get to the dessert my friend picked up earlier from the buffet. He tells me he’s forgotten what it’s called and a few spoons later we decide it’s a sheer khurma because it is milky with vermicelli and dried fruits. Anyway, I am not into milk based desserts of this type but my friend devoured it quite happily in the span of a minute, all the while telling me that he can’t eat any more.

The bill arrives, and we part way with something around MVR 450. The buffet is around MVR170 per person, my tikka masala MVR 160 and my naan, something in the proximity of MVR 30. We decide the buffet is the way to go here; after all there are so many options available including starters and desserts for a price in the vicinity of my chicken tikka masala.

And as for our verdict: a bit pricy yes, but the waiters are good, the ambiance is nice, and most importantly, as my friend pointed out earlier, eating at the Moti Mahal Maldives definitely feels like a feast, and yes you should definitely give it a go.