All about Thoum with Ahmed Rashad | Lonumedhu
Skip to main content

All about Thoum with Ahmed Rashad 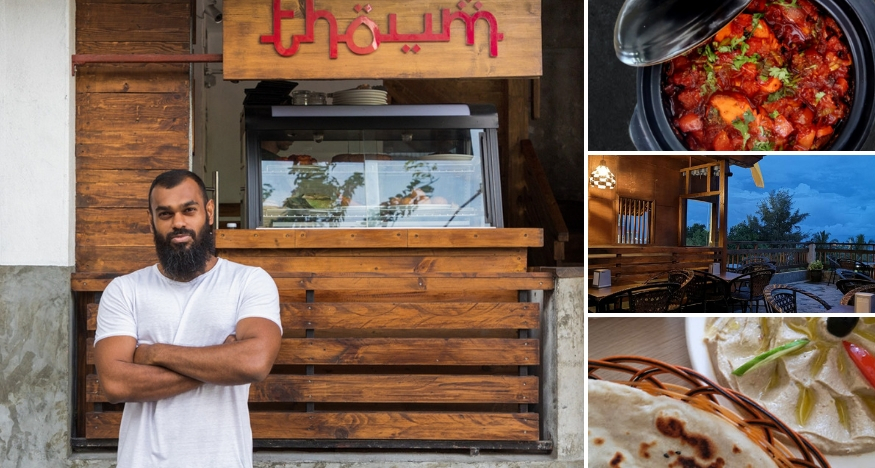 It’s a scorcher of a day when I arrive at Thoum, the city’s sole Arabic restaurant. I meet Ahmed Rashad (just Ahmed, he tells me) a moment later and we amble up the stairs to the terrace. The view is worth a remark, the artificial beach glows in the mid-day sun while in the distance the bridge dwarfs everything in its vicinity, turning speedboats and dhonis into cute little toys and you sort of expect a gigantic hand to swoop down from the sky and snatch them up any moment. But it doesn’t happen and we sit down for a chat.

Lonumedhu: Let’s get started. I’m guessing everyone wants to know whose idea it was.

Ahmed: Well, my family wanted to open up a restaurant, and we were thinking of bringing something new and fresh to the scene. I was really into Arabic food when I was a student.

Ahmed: In Malaysia, KL. And my dad often travels to Dubai and he loves Arabic food as well. Our first step was deciding to have a place that served authentic Arabic cuisine.

Lonumedhu: Cool. Were you around when Skippy’s was a thing? I think they served some Middle Eastern stuff.

Ahmed: [laughs] No, I don’t remember Skippy’s. I spent a long time, thirteen years or so, in Malaysia.

Lonumedhu: Ah right. When did you get back?

Lonumedhu: Did you find any inspiration for Thoum in KL?

Ahmed: Yeah, there’s this place called Hadramawt in Cyber Jaya that I really like. The name comes from an old Yemeni city. When I had to name this restaurant though, I wanted to go for something simple and short.

Lonumedhu: Just wondering, it’s actually pronounced ‘thoum’, [with your tongue between your teeth] like a ‘thaa’ right?

Ahmed: Yeah, although pronunciation differs between regions. Some say Toum with a soft T, like how most of us say it.

Lonumedhu: All right. What does it mean though?

Ahmed: Garlic. Goes well with this website doesn’t it? [laughs]

Lonemedhu: [laughs] Great. I’ve tried quite a few things here, and I really like your ful mudammes.

Lonumedhu: It’s from Egypt isn’t it?

Ahmed: Yeah, and we also feature food from Syria, Lebanon and Palestine. Our specialty is Yemeni, like mandi, ogda and shawarma which are huge hits here.

Lonumedhu: Is the chef Yemeni?

Lonumedhu: What’s his name? How’d you find him?

Ahmed: He’s chef Abdul Jabbar. We found him through our connections in Malaysia where there’s a huge Yemeni network. We got in touch with some restauranteurs from Yemen and got a list, narrowed it down and decided on him. Normally there are specialist chefs, like a specialist for shawarma, for bread etc. but Abdul Jabbar is a master chef who excels in all areas.

Lonumedhu: Cool, so what are the bestsellers here?

Ahmed: Our Adani tea seems to have become a surprise hit. And for mains, mandi chicken, which is really soft and tender. We try to maintain authenticity, like with mandi chicken, we want the taste to remain the same, whether you’re having it in Yemen or Malaysia or here at Thoum.

Lonumedhu: Great. It must be difficult finding ingredients here for proper Arabic food though, no?

Ahmed: Yeah, we can’t really get a lot from the local market. We import stuff from Saudi, especially Arabic coffee beans, and we get some from Yemen and Malaysia. And Adani tea as well, we get it from abroad because it’s a specific type of tea.

Lonumedhu: I see. By the way, do you have plans to introduce new menu items?

Ahmed: When we started out, we didn’t go big, because we wanted our customers to become familiar with the cuisine before expanding. And we’ve grown quite a bit since. Now, we’re trying to include new items every four months or so, and we’ve got some new stuff coming up like babaganouch.

Lonumedhu: That’s great news. Oh, and what about expansion? Any plans to open an outlet in Hulhumale?

Ahmed: [laughs] Yes, it’s an idea I’ve been toying with for a while.

Lonumedhu: Yeah, Thoum’s quite popular, the cuisine’s been accepted so I don’t see why not. So, what do you think about the food culture here? What are Maldivians like when it comes to food?

Ahmed: I think Maldivians like to explore new things, younger Maldivians really. Also, most of us like a bit of spice with everything, and I try to accommodate that by giving those customers a side of Arabic chili sauce called harissa, which is pretty spicy.

Lonumedhu: Great. Anything you’d like to add before we wind up?

Ahmed: I think, overall, we've come a long way and really established Thoum as an urban, authentic Middle Eastern restaurant that’s popular with the young generation. And we're very proud to bring healthy cuisine and an open area concept with a no-smoking policy to the public.

Lonumedhu: Thanks, Ahmed. I really enjoyed the chat.