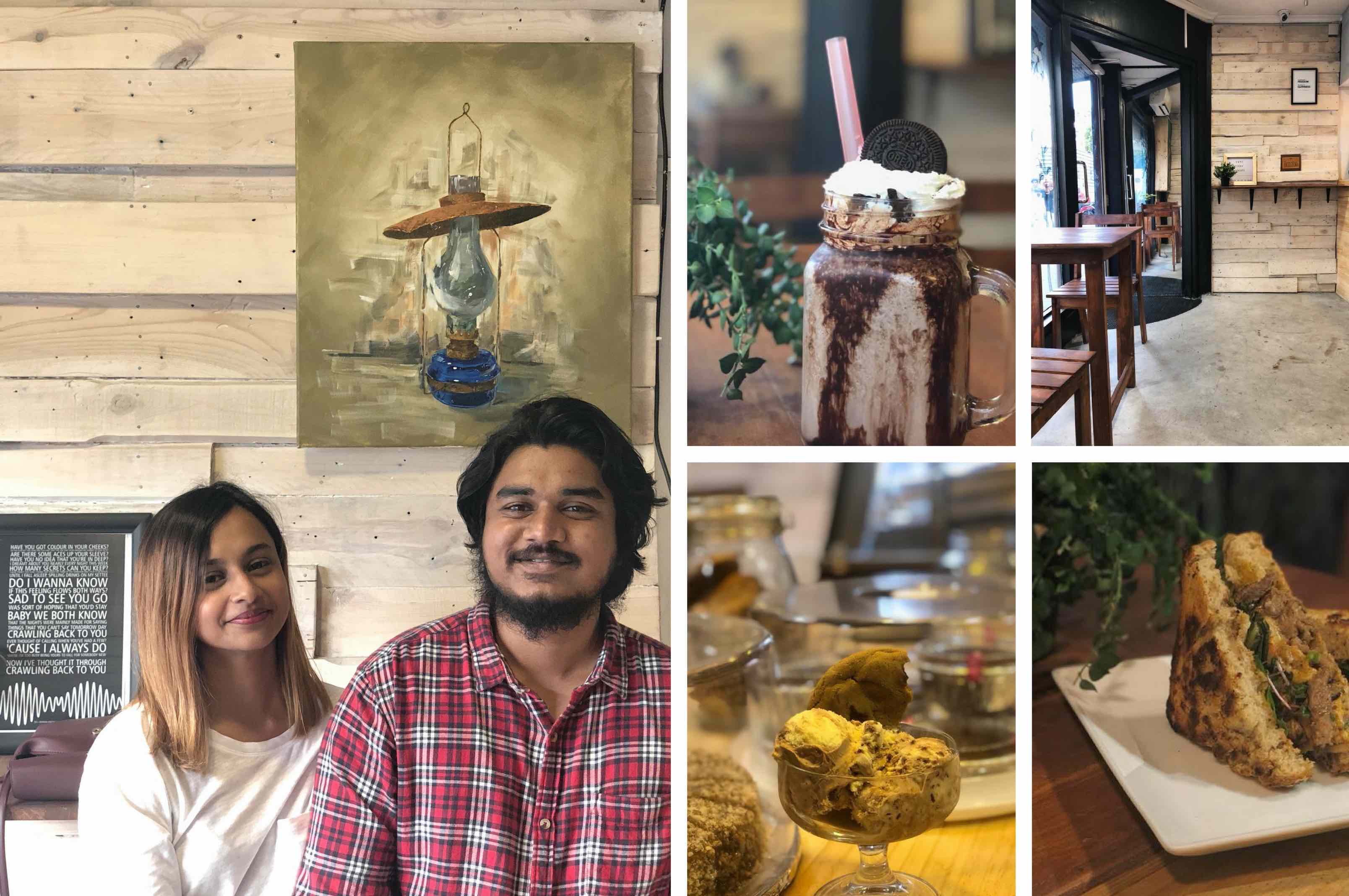 These days little cafés just keep popping up here and there all over Male’. A lot of them come with artsy interiors, carefully selected menu items and a youthful vibrancy.

Thadhoo and Nawaal are two twenty-two year olds who run such a café, the Café Lavaalaa on Rah Dhebai Magu, and Lonumedhu paid them a little visit to find out more about their story.

Lonumedhu: Let’s start with this; what’s the meaning of Lavaalaa? Is it like the word ‘Lavaalaa’ in Dhivehi?

Thadhoo: The place was actually a café called Lavaalaa when we got it and we decided to keep the name. And yes it is like the Dhivehi Lavaalaa. We thought the name was cool and believed we could make something out of it. But we added the café bit; it was previously just called Lavaalaa.

Lonumedhu: When did you guys open your café?

Lonumedhu: Ah I see. We’ve heard that a really young team is behind the café. Is that true?

Nawaal: Yes. It’s mostly our friends and us. We even did the interiors ourselves.

Thadhoo: Basically Nawaal and I, we manage it. But there’s a big team behind us, supporting us. And sitting over there is Ifoo, our one and only employee.

Lonumedhu: If you guys don’t mind us asking, exactly how young are you guys?

Thadhoo: I am twenty-two, actually we both are twenty-two.

Nawaal: People actually ask us why we are doing this at such a young age. But I think when you start early you get a head start on learning.

Nawaal: In my opinion, if you don’t do it, you won’t get the necessary experience, no matter how much you read or watch videos regarding a subject.

Thadhoo: I also have another job so people do ask me how I survive two jobs and also ask me things like ‘why are you wasting your youth’? And this is what I always say, ‘if I don’t work now I won’t have the opportunity to relax when I ultimately want to.’ When we reach our forties, we want to be stable.

Lonumedhu: Okay good thinking. So who makes the food?

Thadhoo: The most popular item we have is the grilled sandwich and it was not even in the menu when we opened. Initially we just had a plain chicken sandwich. Our friends who were working here voluntarily invented it. They were experimenting one day and just came up with it. And now it’s come to be the product in most demand.

Lonumedhu: I see a lot of goods from local online bakeries here. Why did you decide to do that?

Thadhoo: I’ve always had a thing for helping people, it’s in my nature and Nawaal is the same. So we do it with the intention of helping home bakers and providing them with an opportunity. And customers do come to enjoy a specific brownie or cookie, and the good thing is they don’t have to pre-order them, but just rather have them whenever a craving hits.

Lonumedhu: Yes, that makes things easier. So what sorts of food are actually available here?

Nawaal: We are mostly focused on sandwiches. Given the space and everything, that’s what we can do at the moment.

Lonumedhu: We see a lot of drinks as well, like Milo Dino.

Lonumedhu: We’ve talked a lot about the café. Lets talk about you two. Have you guys always been into food?

Nawaal: I like trying new food and tasting new things. Whenever a new café opens in Male’ we always go and check it out.

Thadhoo: I too like exploring new food. I studied in Lanka, and while I was there, I worked for a bit at a café. And working there made me realise that this is more than a hobby. I realised that this is what I wanted to do.

Lonumedhu: What did you do at the café?

Thadhoo: I was a waitress, front of house. And I loved it. I realised that customer service is something I like as well.

Thadhoo: Him, more than me.

Lonumedhu: So what kind of things do you make?

Nawaal: Whatever I wanted to eat at that particular time. It could be noodles, rice, pasta, and spaghetti. I just try to see whether I can do it.

Thadhoo: We do experiment a lot. Even here.

Nawaal: For example, we are about to introduce our homemade ice cream.

Thadhoo: It’s still in an experimental phase but that’s something new we are going to do in the near future.

Lonumedhu: What are your favourite foods?

Thadhoo: That’s a difficult question. I eat everything! Let me think… I also like pasta, and my favourite is rihaakuru dhiya.

Lonumedhu: There are so many cafés popping up all over Male’. What do you think about that?

Thadhoo: When we opened this place I even told my friends that I don’t see other cafés as competition. I want everyone to grow. We do visit nearby cafés and even have our personal favourites.

Nawaal: And if to have a sandwich from any place other than here, we always go to the Sandwich Baa.

Nawaal: We are looking to expand, and we are working on our brand, so our name might change as well.

Thadhoo: To be honest, we are still in a soft stage. We haven’t really flourished into what Lavaalaa is as a brand. Lavaalaa as a brand focuses on supporting home bakers and artists. That on the wall is by Insh’s Art; a lot of it actually, and this one here and the window is by Muru. We want to give something back to the community. We also work on reducing single use plastics. I have to say there’s a lot to Lavaalaa than meet’s the eye. It’s going to grow into something bigger, hopefully better.

Lonumedhu: Since we’ve reached the end of our interview, is there anything you want to add?

Thadhoo: I want to say that we will definitely expand. It’s not going to be just grilling, there are going to be many types of sandwiches in the future, better stuff and a full on menu, hopefully more seating than this. A lot of people do complain about the size of our café. It’s just that when an opportunity presented itself, we took a chance here.

Nawaal: Yes it was actually a risk that we took.

Thadhoo: I want to mention our friends and families. When we were setting the place up they worked here with us until two or three in the morning, all so that we can complete it in a month, so hats off to them; and I also want to thank my parents for backing us a hundred per cent. We couldn’t have done it without them.