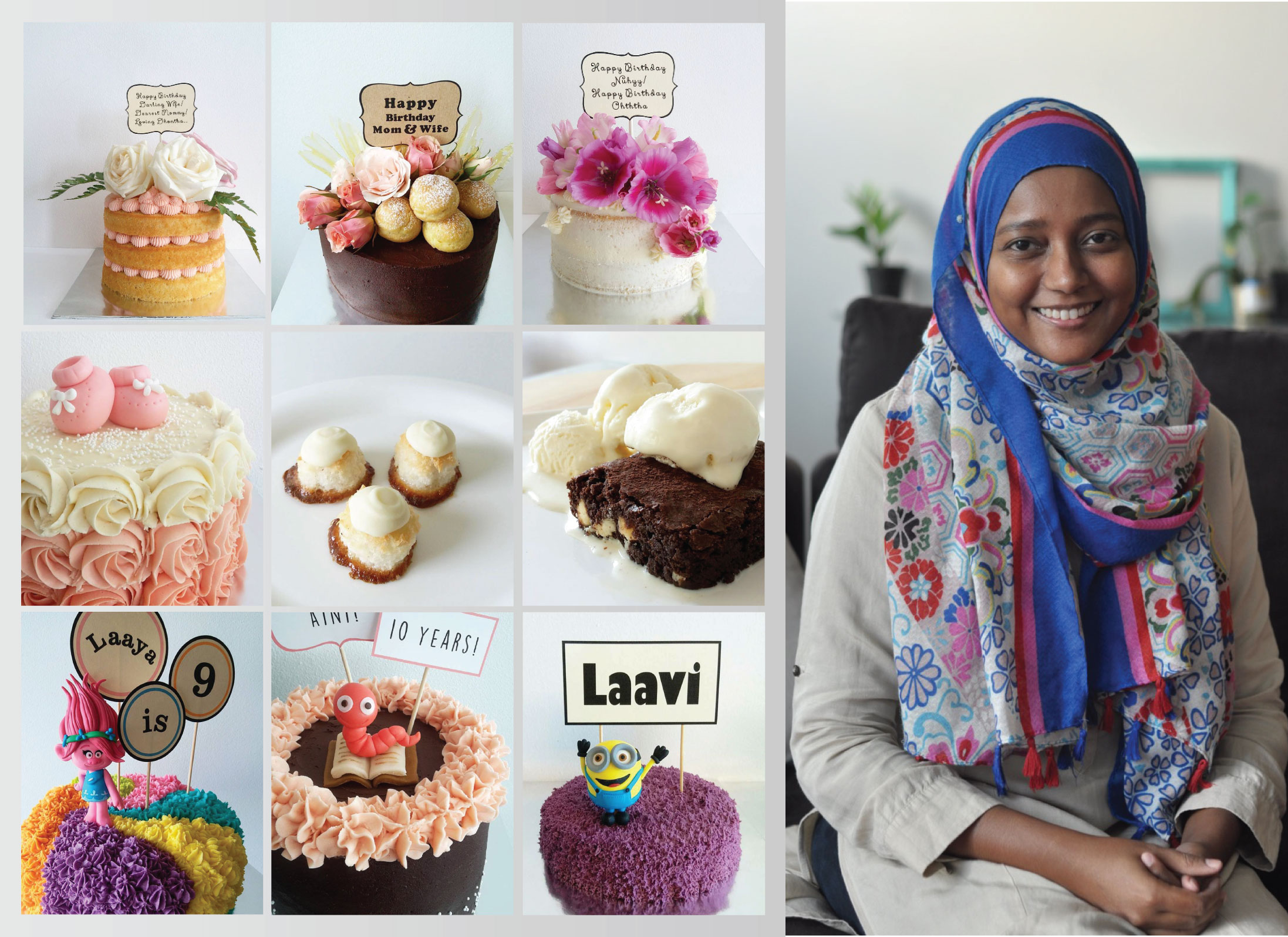 We’ve been hearing some great things about the cakes and bakes from The Little Teashop. So, we contacted Aminath Shazley Mohamed Didi, who makes these sweet treats, to see if we can pay her a little visit and taste some of her goodies.

Shazley welcomed us to her home, and over a cup of tea, a slice of a decadent butter cake, a lovely coconut macaroon and plenty of peanut butter toffees we talked about many things including her love for butter and baking.

Lonumedhu: So let’s start with what’s in your fridge. Is there something that you always have to have, something you make sure that you’ll never run out of?

Shazley: For one thing it’s because I bake, and butter is one of the key ingredients in a lot of the recipes. I also love to eat butter with just a piece of warm toast - it tastes so good. I’d say it’s one of my favourite ingredients.

Lonumedhu: So what inspired you to bake?

Shazley: My mother used to make butter cakes when I was younger. So I learned from her, and I started making them myself, eventually with some adjustments of my own.

Lonumedhu: How old were you?

Shazley: I think I must have been in my mid-teens when I first started making butter cakes. My mother would also get me and my sister children’s cookbooks, and I remember that I used to love looking at them.

Lonumedhu: That’s such a sweet story!

Shazley: (Laughs) I was even making things like profiteroles back then.

Lonumedhu: Wow, that’s considered something really hard to do, isn’t it?

Shazley: I see people struggling to make them on Masterchef, but back then, I didn’t even know it was supposed to be a complicated recipe. I remember trying it out with a cousin when we first saw it on one of the cookbooks. We just followed the instructions and they turned out pretty good.

Lonumedhu: What do you enjoy most about baking?

Shazley: I’d say making something that people would enjoy eating. I just love to bake, and sometimes I’d arrange a tea party or some other event, just so that I have an excuse to bake, and there’s only so much that I can eat on my own!

Lonumedhu: So how did The Little Teashop begin?

Shazley: I was working at an office job previously, but then I got a bit sick, which made it difficult for me to go to work on a regular basis and so I decided to stay at home and try to find something I could do from home. I have thankfully recovered from the illness now, but one thing I realised during that time was that I really love baking, and so I started a Facebook page and am now fully dedicated to baking.

Lonumedhu: So let’s talk about flavours again, we’ve talked about butter, what other flavours do you like?

Shazley: Chocolate, and I also really love cinnamon, and pumpkin.

Shazley: Yes (laughs), pumpkin cake. Have you tried it?

Lonumedhu: No. What’s it like? How about the texture?

Shazley: The texture is a bit denser, and it’s really good with cream cheese frosting. The cake doesn’t really taste of pumpkin, and I’ve had people try it and not realise that it was pumpkin. I think that’s because of the cinnamon in it.

Lonumedhu: Do you make pastries as well?

Shazley: I completed a short course for pastries last year at EFES Institute because I wanted to learn how to make things like croissants. But I haven’t really attempted to make them since then. That’s the first time I ever participated in a baking course. Otherwise I just try out recipes and make adjustments to them.

Lonumedhu: What kind of adjustments do you make?

Shazley: For example, I find a lot of recipes to be too sweet, especially the American recipes. So even when I do my first trial I cut down on the sugar.

Lonumedhu: So what’s the most challenging part of your work?

Shazley: One thing is the irregular supply of ingredients, and one example is the current shortage of salted butter in Male’.  Although a lot of people use unsalted butter for baking, I prefer to use the salted version, and so I’ve had to make adjustments to my recipes.

Another thing that concerns me is the questionability of the ingredients we get in the country. Every once in awhile we get a scare about flour and eggs, and I worry about the ingredients I am putting into my baked goods.

Another challenge for me is time management. Since I work alone, at the end of the day I get really tired, and there’s only a certain amount of orders that I can take. That’s one of the reasons why I want to open an outlet, a teashop, so that I can hire people and start baking on a larger scale than I do at the moment.

Lonumedhu: That’s exciting! Tell us a little more about it.

Shazley: The teashop is  in its initial stages but I am hoping to have it open soon next year.

Lonumedhu: And what are we going to find there?

Shazley: Mostly sweet treats. I want it to be a place people can drop by after having a meal, just for something sweet. I plan to add some savoury items to the menu but the main focus is going to be on desserts.

Lonumedhu: I’ve seen some cakes with pretty decorations on your Instagram feed. Shall we talk about that?

Shazley: My decorations are actually very simple and basic since I’ve never done a formal course on decorating, apart from a short two-week course on fondant figure modelling last year.

Shazley: It’s like playing with clay, and you have to sculpt them. It can be a bit difficult because fondant dries up really fast and it can get cracks so I have to work very fast. The proportions and the colours can be tricky too.

Lonumedhu: So what are the most popular items from The Little Teashop?

Shazley: Butter cake and buttercream frosting for birthdays, and chocolate cakes and cupcakes. I also offer frosting choices, such as chocolate, white chocolate, and coffee, among others. Brownies and shortbread cookies have also received very good reviews.

Lonumedhu: Last question, if you were making something just for yourself what would you make?

Shazley: I’d usually go for butter cake, and I love it with a cup of black tea.

Lonumedhu: Thanks so much for meeting with us, and also for the tea; the cake is just too delicious.

Want to read some more interviews? Check out our conversation about coffee with Meraki's founder and lead roaster Mabrouq Azeez. Or if you are in the mood for some cooking, have a look at our top 10 recipes.