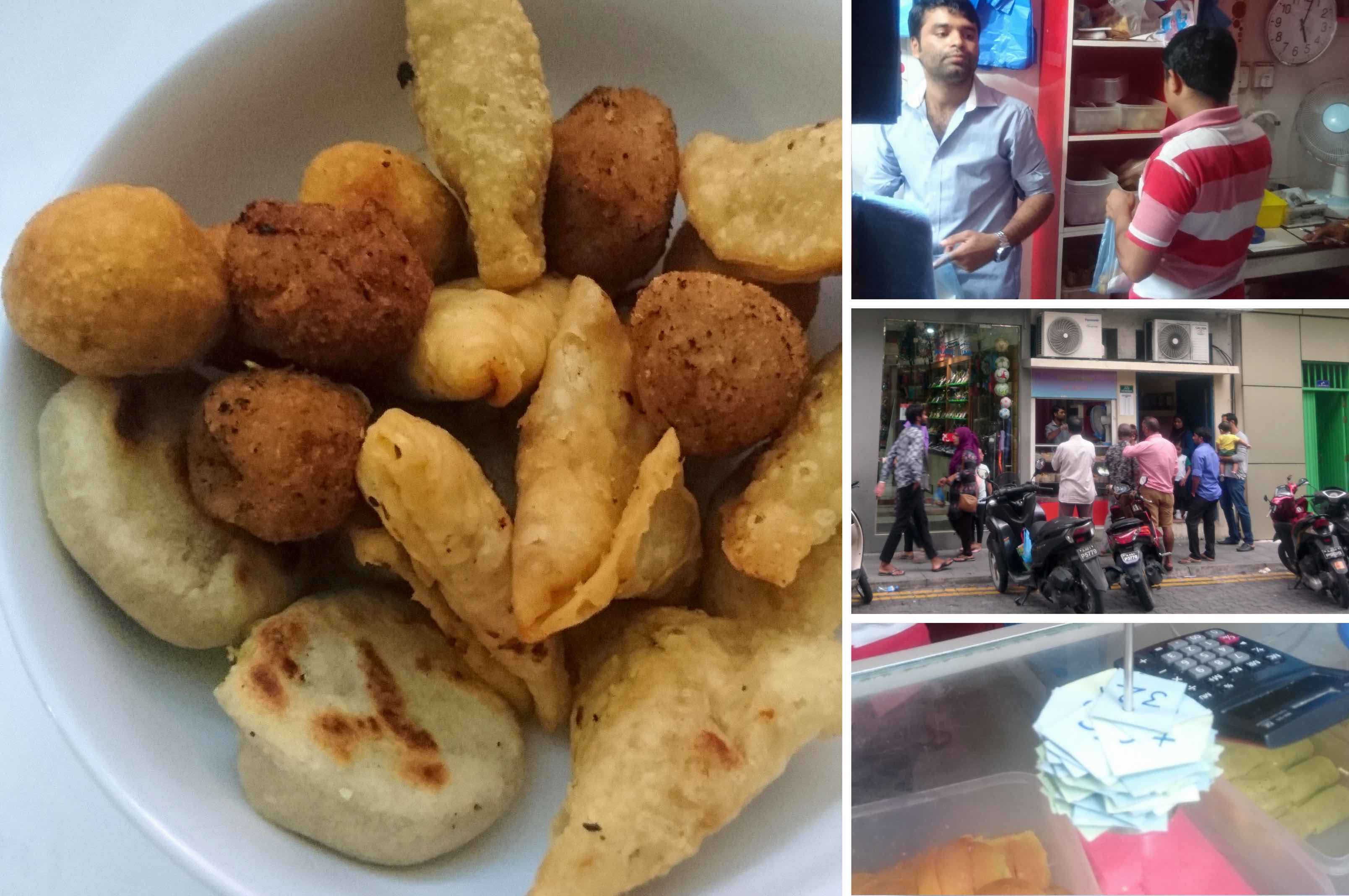 It may surprise some of you to know that what was a family business in a little house near Olympus has become a small enterprise on the main street of our fair city. That’s right, on Majeedhee Magu, on the ground floor of G. Verona. You’ll still find queues here, there’s no avoiding them. Of course, everyone knows Husnoo; they’re practically synonymous with bajiyaa, and great bajiyaa at that. But that triangular hedhikaa is not their only forte as you will see. 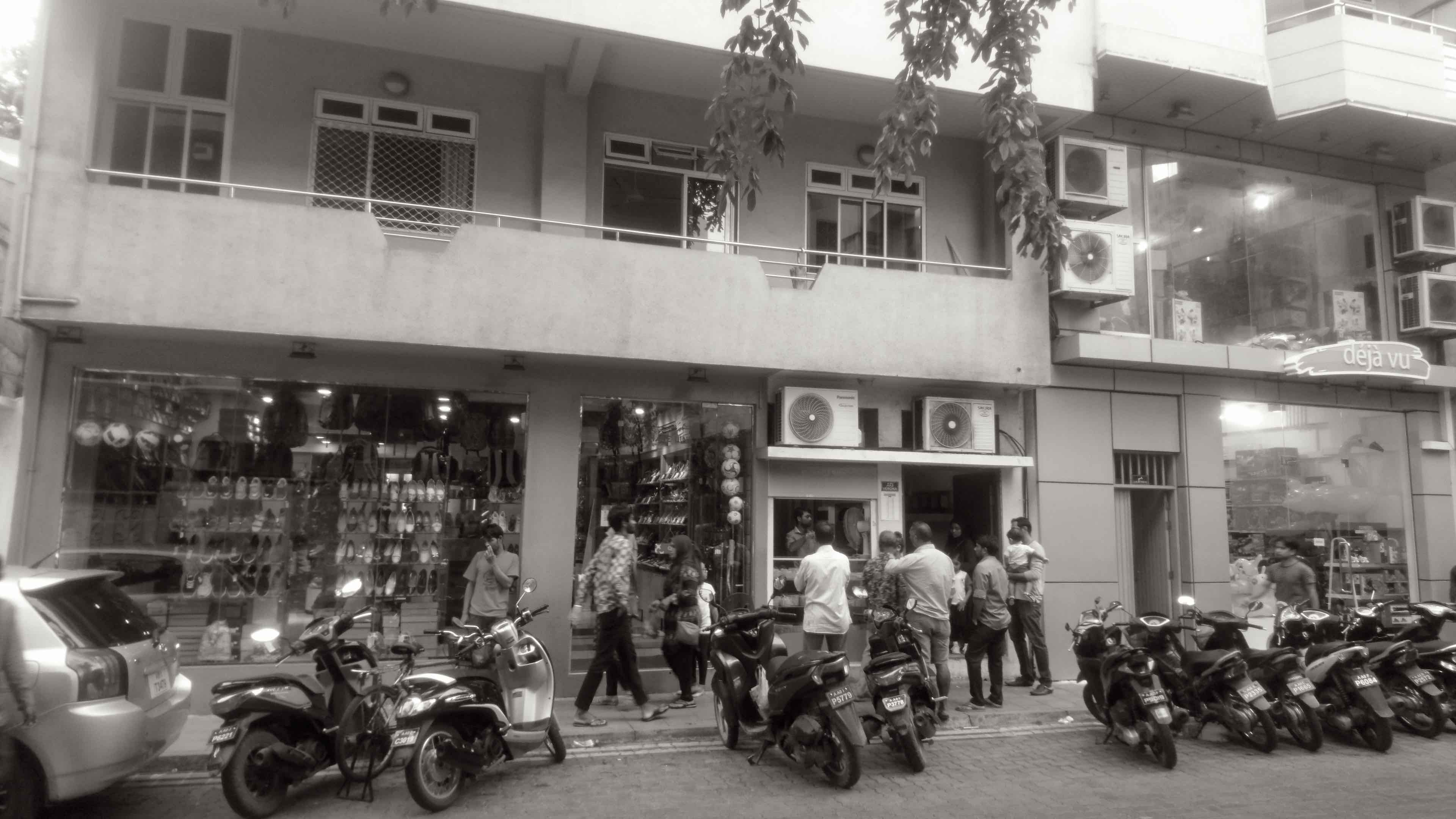 So here I am waiting in line. How the queue system works is not immediately obvious. You need to take a number from the counter, the numbers are stacked on a slender steel rod. The server calls your number and you’re all set to order.

And order I do. Six cutlas, four handulu gulha, four bajiyaa, four mas roshi, four petties and a cream jehi banas to finish it off. I part with 32 MVR for this feast and off I go. 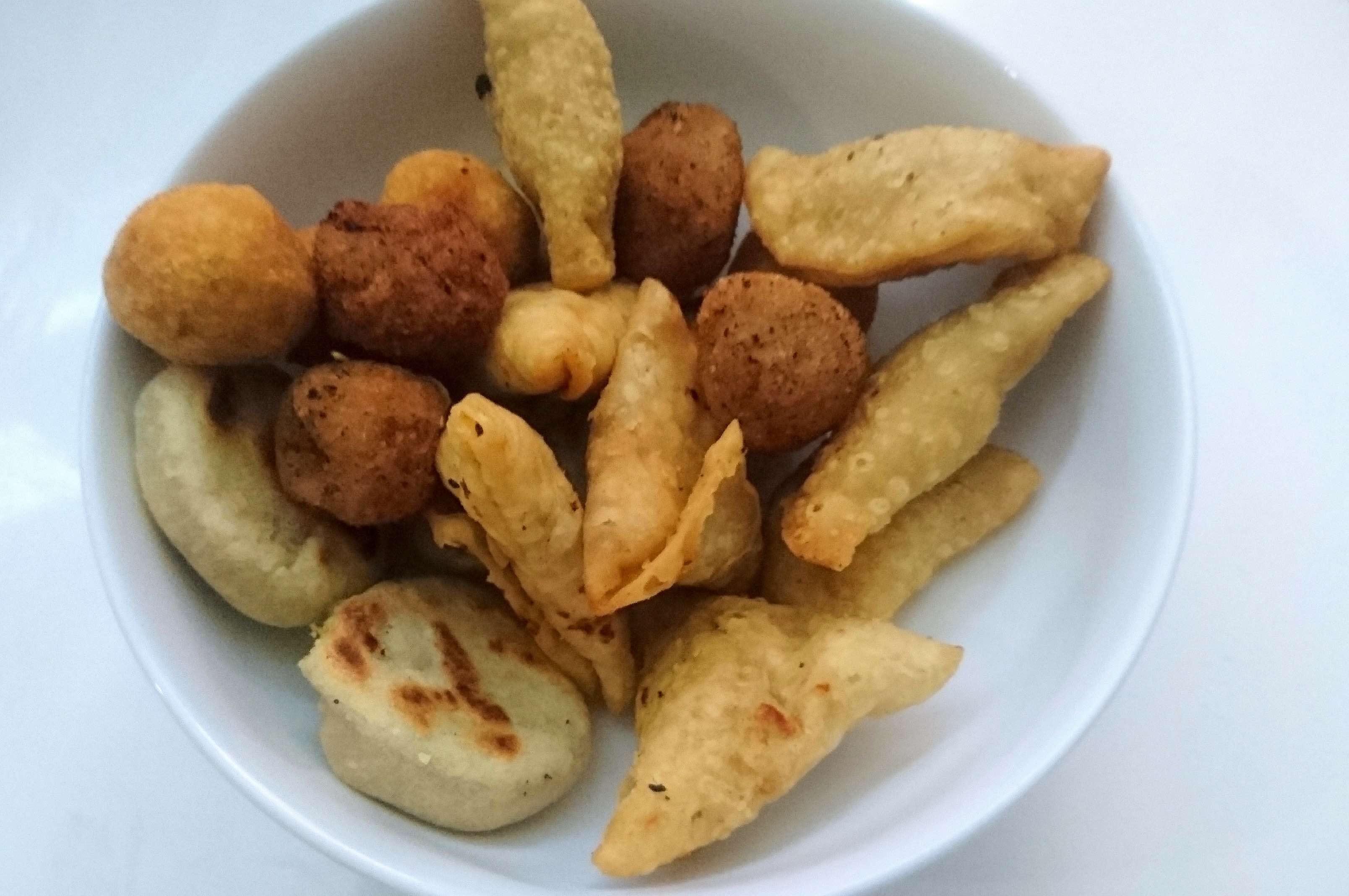 Back home, I put all the hedhikaa in a bowl and observe the fruits of my foraging. They look appealing enough. Now for the moment of truth.

Saving the bajiyaa for later, I start with a cutlas. It’s neither too small nor too large. The tuna to potato ratio is perfect. Plus, there’s a distinct, peppery taste that I find quite appealing. And it doesn’t leave an oily trail down my throat. I have three more. Well done on the cutlas front.

Now, the petties. Looks-wise, they’re no roses; they’re missing the frills that adorn the traditional pettie. The crust is crunchy but there’s too much dough. Yet I must confess that the mix inside is wonderful, there’s that delightful peppery taste again, much like the cutlas. But overall, it’s a bit underwhelming.

Moving on. The handulu gulha. It’s moderately spicy, super crunchy and the mix is awesome and plentiful. Oh, and you can really taste the rice that went into the batter. It’s a total winner and I firmly believe it can give Saatanugey gulha a run for its money.

Next, the mas roshi. They’re cute little things, like kid-sized cousins of proper mas roshi. When I bite into one, though, there’s something that just doesn’t taste right. It’s definitely the mix, perhaps it’s a bad batch. There’s also too much dough and not enough stuffing. It’s a weak offering and if this is typical of mas roshi from Husnoo, it must be avoided at all costs.

And now for the bajiyaa. It’s readily apparent that this is their flagship hedhikaa. It’s perfect in form, not a second longer in the fryer than necessary. You can tell because it’s got that beautiful, almost golden, colour. And when I bite into it, it’s just dreamy. Spicy, with a smidge of sweetness, this is clearly a milestone in hedhikaa and its reputation is well deserved.

Last but not least, I try the cream jehi banas and realise it’s not to be dismissed. The bun is really soft, and I mean really, imagine biting into a cloud. It’s sweet, but not excessively nor is it overly creamy. It’s a great way to wind up a hedhikaa binge.

Would I recommend Husnoo Raha? Hell yes! Just avoid the mas roshi and gorge yourselves on the gulha, bajiyaa and cutlas. And throw a creamy banas into the mix while you’re at it. You won’t be disappointed.