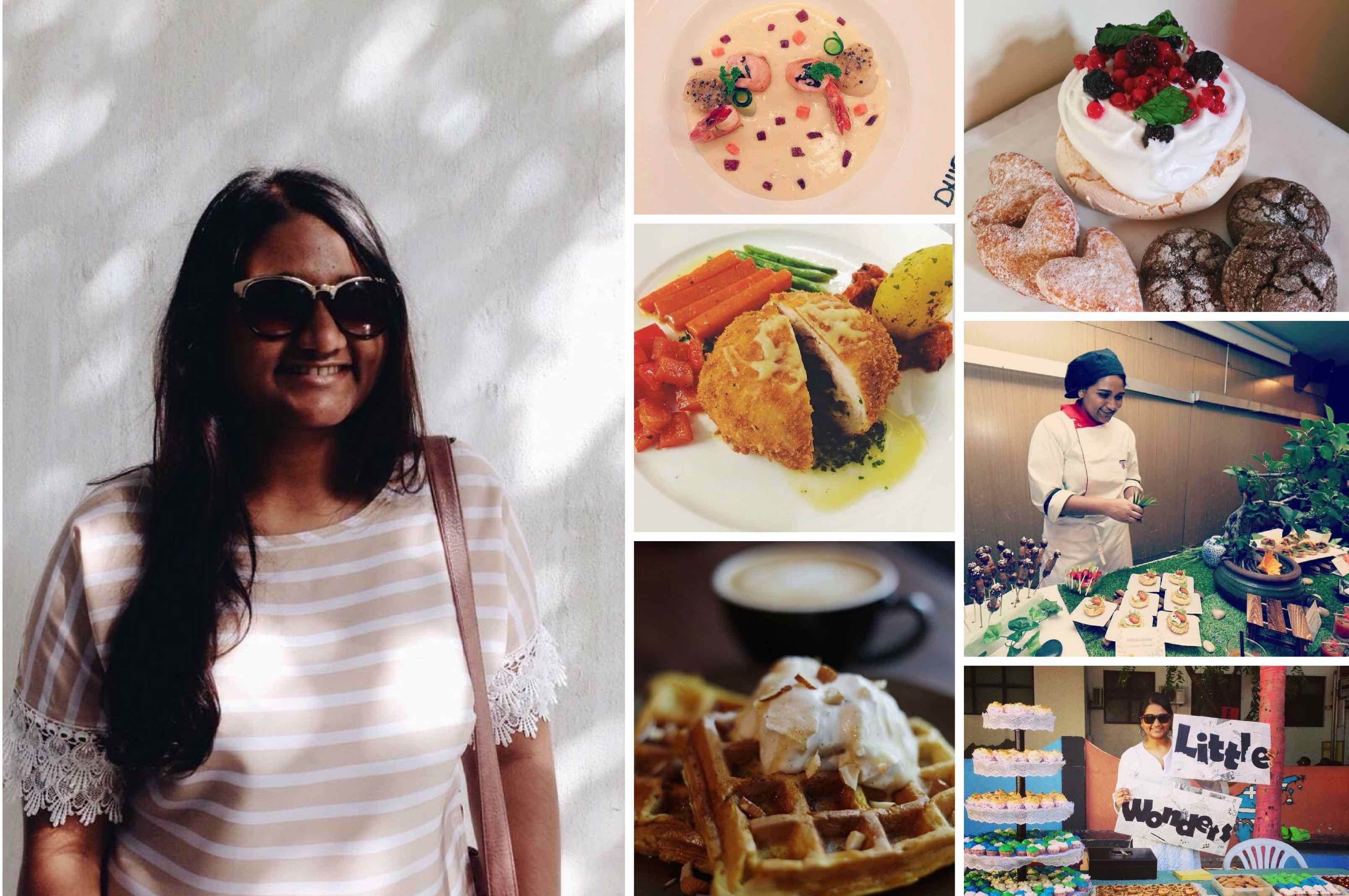 For this week’s feature article, we have a chat with Dhifla Ahmed Ismail, who is also known as Dhifoo.

To put things in a nutshell, Dhifoo is educated in the field of food, has interned in the kitchens of some luxury resorts in the Maldives, has also worked for an international franchise, runs an online bakery called Little Wonders, and is currently gearing up to run the kitchen at Meraki Coffee Roasters. Also, she’s just twenty-four. So, read below to find out some more about her culinary adventures.

Lonumedhu: Let’s begin with what you are doing these days?

Dhifoo: After I came back from completing my degree, I did an internship at Conrad Maldives Rangali Island. I was there for 6 months and I was going to apply for a permanent position at another resort when Meraki’s Mabrouq presented me with a great offer. Meraki is being extended to include a café section and I will be running the kitchen. And it’s very exciting! Now I am at the stage of creating recipes and market testing them to compile the menu.

Lonumedhu: That does sound exciting. Tell us about what you studied.

Dhifoo: I studied Culinary Arts and Food Service Management from the Taylor’s University in Malaysia. While there, I became very sure of the path that I wanted to follow.

Lonumedhu: What do you mean?

Dhifoo: When I was running the bakery online here, as well as making desserts on my own, I always had an interest in the hot kitchen. But from the moment I went off to study, I was absolutely sure that I wanted to work in the hot kitchen.

Lonumedhu: We’ll get back to the topic of your online bakery in a little while, but first, tell us what a hot kitchen is?

Dhifoo: The hot kitchen is where the main dishes are made. Similar to how the bakery is where desserts are usually made.

Lonumedhu: So, the hot kitchen is where you make things like steaks?

Dhifoo: Yes, steaks, and also different cuisines, for example pastas and spaghettis if we are doing the Italian cuisine.

Dhifoo: It started because I wanted to have a stall at the Katti Hivvaru Festival a few years back. It was only after I had submitted the application form that I realised that mine was going to be the only food stall there. So, I made bite sized items of different kinds. I named the stall Little Wonders and I got a lot of recognition just within the two days that I had the stall running. A lot of people kept asking me to create an online bakery and that they would place orders if I did so. So I did that. A little while later I left for my studies and I continued with the bakery whenever I came back for holidays.

Lonumedhu: I actually visited your stall that time, and ate your yummy pavlovas.

Dhifoo: Before the whole stall thing I also worked at the Coffee Club at the airport. The place had just opened and I had just finished my A ‘levels. I received a lot of on the job training there. And because it was a franchise, the food was very standardised, and since it was at the airport, the service had to be fast. So, I actually got to learn a lot from that experience. It was also a bit of a test. Like before I went off to study, I got to see whether I would be okay with cooking everyday, and it turned out that I loved it. I was there for a year.

Lonumedhu: Okay, how was it like working at Coffee Club? Did you have to spend a lot of time there?

Dhifoo: When I was at the Coffee Club, I worked around nine hours per day but there were days when I had to work a little bit longer than that.

Lonumedhu: Were you standing the whole time?

Dhifoo: Yes! But its nothing compared to working at a resort. During my time interning at Conrad as well as Cheval Blanc Randheli, we worked in shifts, so it wasn’t at a whole stretch. But during the festive season and other occasions, there were times when I worked for 14 hours at a stretch. It was tiring, but it was also so cool!

Lonumedhu: So, what made you choose a career in food?

Dhifoo: I liked cooking even when I was a kid. I used to wake up really early because in my house, roshi gets made in the early hours. According to my mum, when I was little I will be often up on a stool, helping to cook the roshi. And also there’s always a lot of cooking at home. My mum is such a foodie and she makes really great food, she even bakes. So I think it sort of started with her.

Lonumedhu: How young were you when you started cooking things on your own?

Dhifoo: I remember baking when I was thirteen or fourteen.

Lonumedhu: Okay, that’s a bit young, how did you learn?

Dhifoo: From my mum, and also from cookbooks; my mum had a lot of cookbooks with cookies and cakes and such things.

Lonumedhu: So let’s make it ‘things’?

Dhifoo: Okay, a really simple answer just occurred to me. People who know me know this; popcorn is my absolute favourite. I can never have enough of popcorn.

Lonumedhu: How about caramel popcorn?

Dhifoo: With caramel, I can only eat a little bit. I am not that into sweet things. Chocolate I can eat a lot, but other sugary things I can only take in small doses.

Lonumedhu: What about when it comes to meals? Do you have a favourite?

Dhifoo: If I have to pick a larger meal, I’ll pick anything with beef in it; good beef in it.

Lonumedhu: So do you have a favourite thing to make or any ingredients that you particularly like?

Dhifoo: Whenever I make something savoury I always have to put a lot of garlic in it.

Dhifoo: (Laughs) even when I am following a recipe, I’ll put in much more garlic than what it calls for.

Dhifoo: Especially if I am marinating something like meat, I just have to put lots of garlic in there.

Lonumedhu: How about a dish? Is there something you particularly like to make?

Dhifoo: Whenever I have people over, I always make steak. Steak with mushroom sauce; that’s something I can make with a little spin of my own.

Lonumedhu: Will we get that from Meraki when you are done with compiling the menu?

Dhifoo: Yes, perhaps. The interesting thing about what I am doing with Meraki right now is that we will be changing the menu continuously; so that we don’t have a specific menu for a long period of time. Of course if something is largely popular we’ll definitely have it regularly. These days I am actually market testing two dishes there.

Dhifoo: Right now there’s a quinoa and lentil salad for lunch because a lot of people I talked with wanted something healthy. We serve it with grilled chicken. And then there’s a bit of an experimental spiced pumpkin waffle for breakfast. It has nutmeg and other spices in it, and we serve it with a no churn ice cream, like a semifredo. And treacle, the ‘dhiyaa hakuru’ type thing we get from Sri Lanka, that, I’ve discovered goes very well with the waffle.

Lonumedhu: So, last question. Since you’ve worked at high-end places and franchises, are there any particular restaurants that you want to go to?

Dhifoo: I really want to go to Heston Blumenthal's The Fat Duck. It’s in the UK. It’s because these days I am watching Chef’s Table on Netflix. They show the life of top chefs, sort of like a documentary, with interviews and all. I get to see a glimpse of their thought processes, so it’s very interesting. I also want to go to the Osteria Francescana, a three-Michelin-star restaurant based in Moden, Italy. It's one of my absolute favorite chef’s, Massimo Bottura's restaurant.

Lonumedhu: That’s it. Thanks Dhifoo for having a chat with us and can’t wait to see what else you come up with for Meraki.