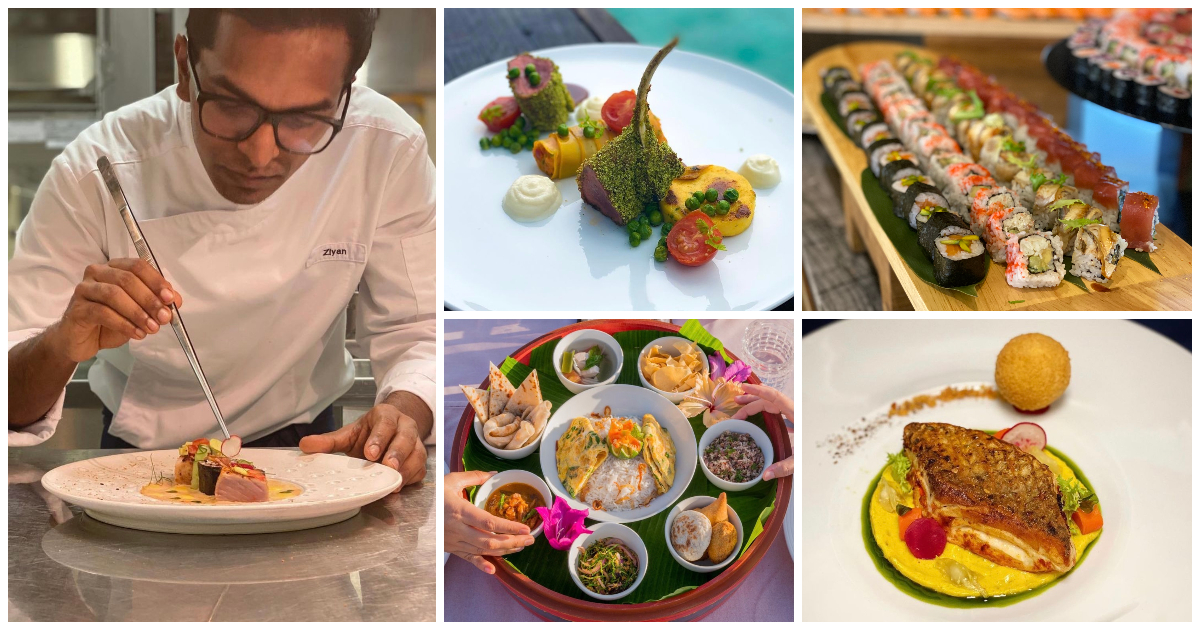 We have a chat with Ali Ziyan, the chef de partie at Milaidhoo Island Maldives, and we talk about how his interest in food began, his culinary experiences, and his thoughts on the Maldivian culinary industry. Read on! 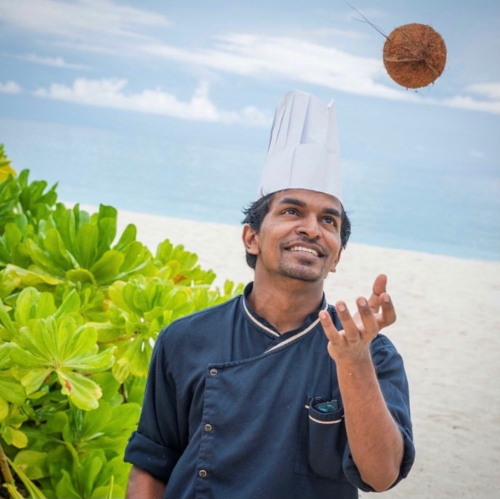 Lonumedhu: So, how did you get into the culinary industry?

Ziyan: I always loved cooking. Even as a child, I had this passion for food, which was mainly inspired by my dad, who cooks and runs his own small business; but I never thought about becoming a chef.

When I was doing my Hotel Management diploma in Sri Lanka, there was this apprenticeship at Four Seasons resort. It’s a training programme that’s carried out every year; on the job training where you study and do exams and work at the same time. I had plans to study more, but I applied on my uncle’s request, and I was selected. The person who interviewed me suggested that I take Food and Beverage – even at that time I had no idea that it would entail working in the kitchen, but I ended up taking his advice. And that’s how I started – from that interview and apprenticeship programme. 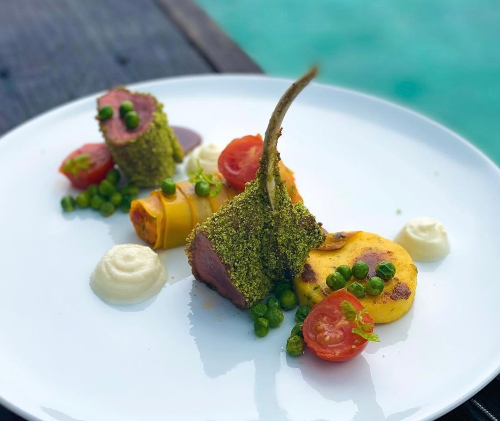 Lonumedhu: Tell us a little bit about your experience in the industry.

Ziyan: Even when I started, I was very passionate about it. I started watching food shows like MasterChef and Kitchen Nightmares. Gordon Ramsey was my first chef hero. So, I started following his videos, and I developed an interest in gourmet food, and I started working in the cold kitchen. For cold kitchen, you have to prepare sandwiches, salads, appetisers, all cold preparations.

From there, I moved to Club Med resort, where I had the opportunity to learn a lot about different types of cuisines. I worked at one more resort before I moved to Six Senses, which is where I really grew into becoming a professional chef. I learnt more about organic, healthy food.

Then, I moved to Vakkaru and then to Fushifaru where I had my most productive year; I handled a restaurant with one steward where I made changes to the menu and the restaurant itself. I then worked in Oishii restaurant in Hulhumale’, where I learnt about Japanese hot cooking and kitchen management. That was when I took part in a few cooking competitions as well. Next, I worked in LUX* North Male’ Atoll resort as a specialty sushi chef, where I had an amazing year with an amazing team.

I currently work in Milaidhoo resort as a specialty chef de partie where I concentrate on Maldivian fine dining where authentic Maldivian flavours are brought in a modern, fine dining concept. For example, we might take murangatholhi riha (drumstick curry) and present it as a puree or a sauce; same taste, just a different concept.

Lonumedhu: Is it difficult to transform Maldivian cuisine into a fine dining concept?

Ziyan: It’s not difficult to change 100 percent Maldivian food into fine dining. It’s all about creativity, fusion and finding different combinations that work.

Lonumedhu: So, you’ve worked at both restaurants and resorts. How would you compare the two experiences, working at a resort and working in a restaurant?

Ziyan: In restaurants, you can take on other responsibilities and learn to manage and lead, but they’re usually focused on one specific cuisine, so the growth opportunities are limited, compared to a resort which would most probably have several restaurants with different cuisines. Resorts also carry out culinary trainings and you will have the opportunity to meet different chefs from different nationalities.

Career-wise, I would say resorts are better for growing and expanding your career. When you work in a bigger place, you have the opportunity to learn more and gain more professional skills, but in smaller places, it’s easier to show your talent. So, I would say, if you’re starting out, to work in high-end five-star companies first, and with that knowledge, move to smaller-scale operations where you can use what you learn and make a bigger impact. 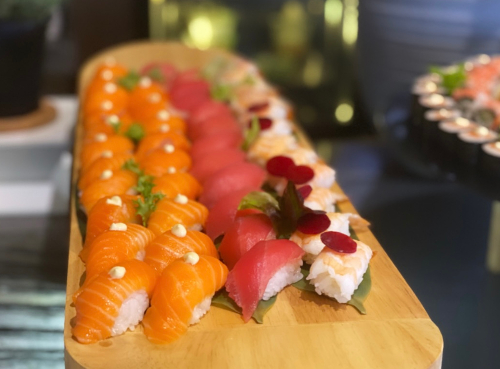 Ziyan: At the moment it’s Japanese and Maldivian, but I’m still willing to learn and specialise in one more cuisine. Maybe classic French or Thai cuisine. Right now, I’m focused on baking and pastry making, which is completely new to me. It’s a completely different story. I started working in the bakery during lockdown in the resort, and it was so new to me. I felt like it took me back five years, everything was new.

Lonumedhu: What are your thoughts on the current food scene in the Maldives? Has it improved compared to before?

Ziyan: It is improving, and people are coming up with different concepts. But I do think it’s challenging as well, because us locals are always looking for something new to try. So, it’s becoming harder to keep it interesting.

I think what a lot of restaurants fail to understand is that the kitchen is the most important component of a restaurant; usually the dining area is very big, but the kitchen is very small, which makes it very hard when I go for consultations and give trainings. The first thing is to get a good chef, then come up with a good concept, which people are kind of doing in reverse now, I think. 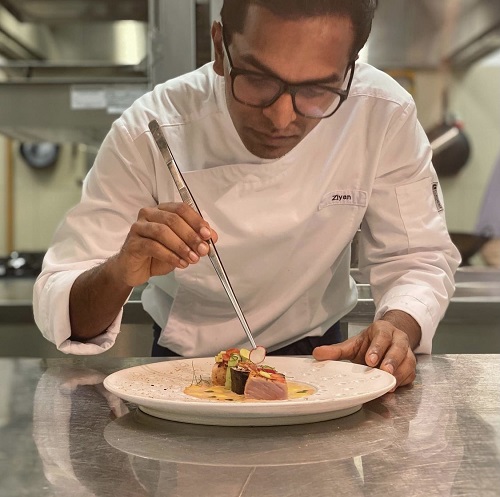 Lonumedhu: What do you think makes a great chef? What qualities need to be there?

You have to be creative as well. Don’t make the same things over and over. Be willing to combine different ingredients and create new things. And you have to respect the customer. And of course, you have to be very hygienic, and you must respect your workplace and colleagues.

Lonumedhu: What does your vision for the future look like?

Ziyan: I would like to have my own restaurant in the future, in either Male’ or Hulhumale’. But when I do it, I want to make it very well – in a way that can get people talking and raving over the food. I might also expand out into the guest industry. Because my dad already has a guesthouse with a small restaurant, which I would likely take over in the future. I would also like to conduct more courses and cooking classes in the future. And help small businesses expand and grow in the industry. 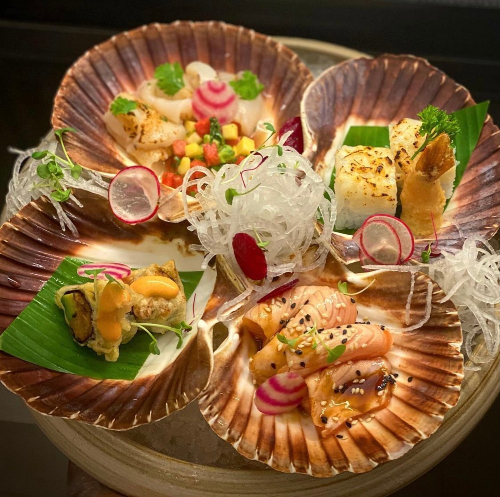 Lonumedhu: Before we wrap up, what advice would you give to young people who want to go out into the culinary field?

Ziyan: The first thing is to respect everyone and have a good attitude with everyone. You have to understand other people’s feelings also. you have to respect your work as well. Fall in love with the food and be passionate about your food. You can be the best chef in the world, but if you fail to respect others then you won’t succeed. Attitude is everything, it’s the first passport you carry with you everywhere.

Lonumedhu: Anything else you want to add before we end the interview?

Ziyan: One thing I want to see is more young people coming out into the culinary field. I would love to help whoever is interested in the field and give them more opportunities.