An Arabian Feast at Lazeez Gourmet 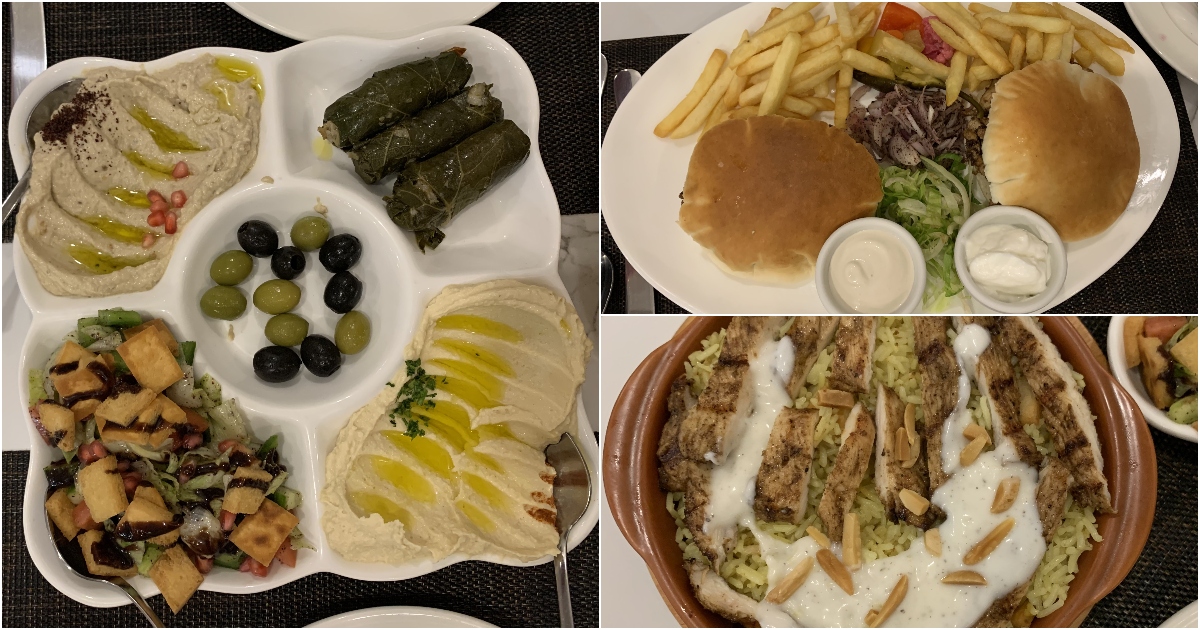 We recently tried the food at Lazeez Gourmet, a relatively new Arabian cuisine restaurant at Hullhumale’ on Hithigas Magu.

The restaurant has both indoor and outdoor seating. The indoor space is significantly larger with two rooms. The décor has a Middle Eastern feel to it as well, with lanterns, patterned decorations on the wall and glass windows, and high-backed chairs in a rich red colour.

Walking into the restaurant, we were immediately welcomed by a server who directed us to a table. Once seated, the menu was promptly delivered to us with a bottle of water.

The menu was extensive, featuring a wide range of Middle Eastern dishes, including the traditional Middle Eastern mezze platter, shawarma straight from the grill as well as rice and different meat and veg side dishes, desserts, and drink options. Not only was the menu easy to follow with a description below each dish, but our server was also extremely helpful with our queries regarding dishes and portion sizes. This certainly made the ordering process seamless!

After much deliberation, we opted for the vegetable mezze platter, with a side of pita bread as an appetizer, and the fattet chicken and mixed shawarma platter. We also ordered cups of Turkish coffee. 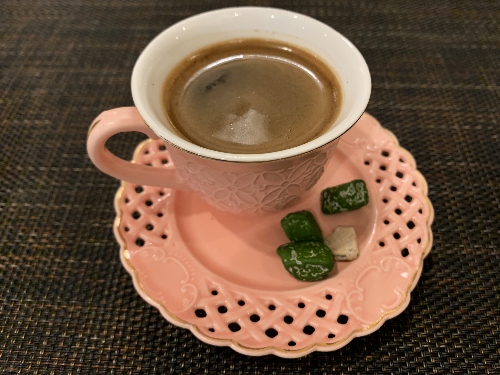 First arrived the Turkish coffees in ornamental ceramic cups, complete with a side of rock chocolates – which we later found is a common way to serve this drink. The coffee was rich with a bittersweet taste. 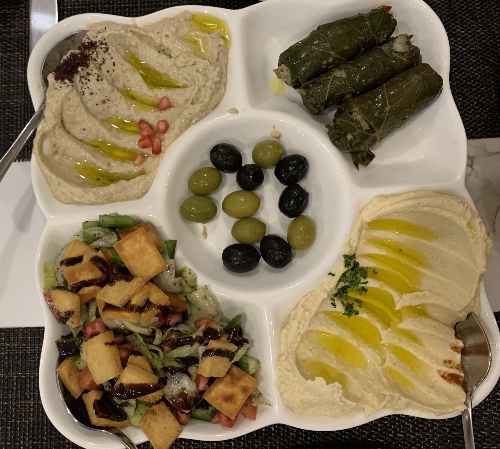 Shortly after followed the mezze platter, along with the pita bread which were soft and fluffy. The mezze consisted of five separate dips/snacks: hummus, moutabal, fattoush, warak enab and marinated olives. The two dips – hummus (made with chickpeas, olive oil, and tahini) and moutabal (made with eggplants and tahini) – were creamy and rich, with a slight umami flavour. The pita bread was the perfect vessel to eat these dips with!

Fattoush is a type of salad made with a mixture of vegetables and toasted pita bread cubes. Lazeez Gourmet’s version is made with chopped tomato, cucumber, lettuce, radish, mint, and rocket leaves along with pomegranate seeds. The toasted pita gave a nice crunch to the dish, which is different from the usual salads you get, while the herbs and pomegranate balanced the flavours beautifully.

Warak enab are stuffed vine leaves, which were filled with a mixture of cooked rice and herbs. It had a slightly sour, minty taste which came from its marination in a mixture of lemon juice and olive oil. Utterly different yet so tasty! 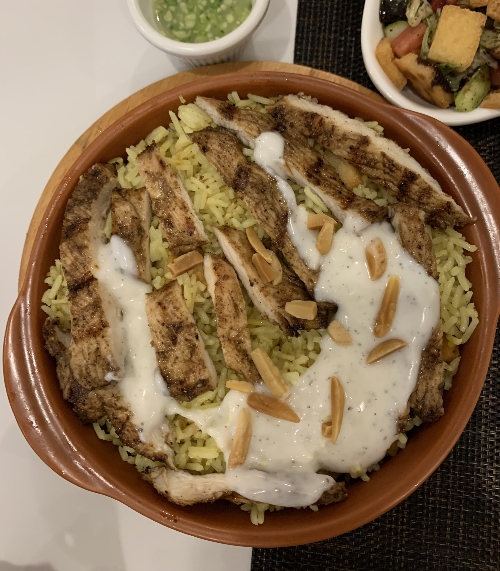 Next came the fattet chicken – a rice dish dotted with toasted pita bread and topped with grilled chicken and a type of garlicky yoghurt. The rice was accompanied by a refreshingly spicy and sour sauce made of lemon juice and herbs which just added that extra oomph to the dish. The mixture of cooling yoghurt and savoury rice and chicken was extremely satisfying and flavoursome. The toasted pita bread (again!) added a nice crunch to the dish and helped with the spiciness of the lemony dip. 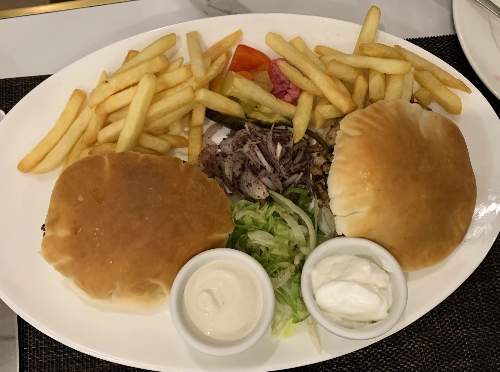 Then, the mixed shawarma platter. The shawarma consisted of pita bread, stuffed with grilled chicken and lamb, along with a side of French fries, labneh (a Middle Eastern cream cheese), thoum (a creamy, spicy garlic sauce) and pickles. The meats were flavourful, juicy, and grilled to perfection, and were delicious when eaten with the pickles and dipped into the sauces.

Safe to say that this feast left us extremely stuffed. We chose not to go for dessert although Lazeez Gourmet has an assortment of Middle Eastern sweets such as basbousa (semolina cake), Palestinian milk and rice pudding and halva.

If you are looking for tasty, authentic Middle Eastern dishes to try with a group of friends or family, you know which place to visit now!