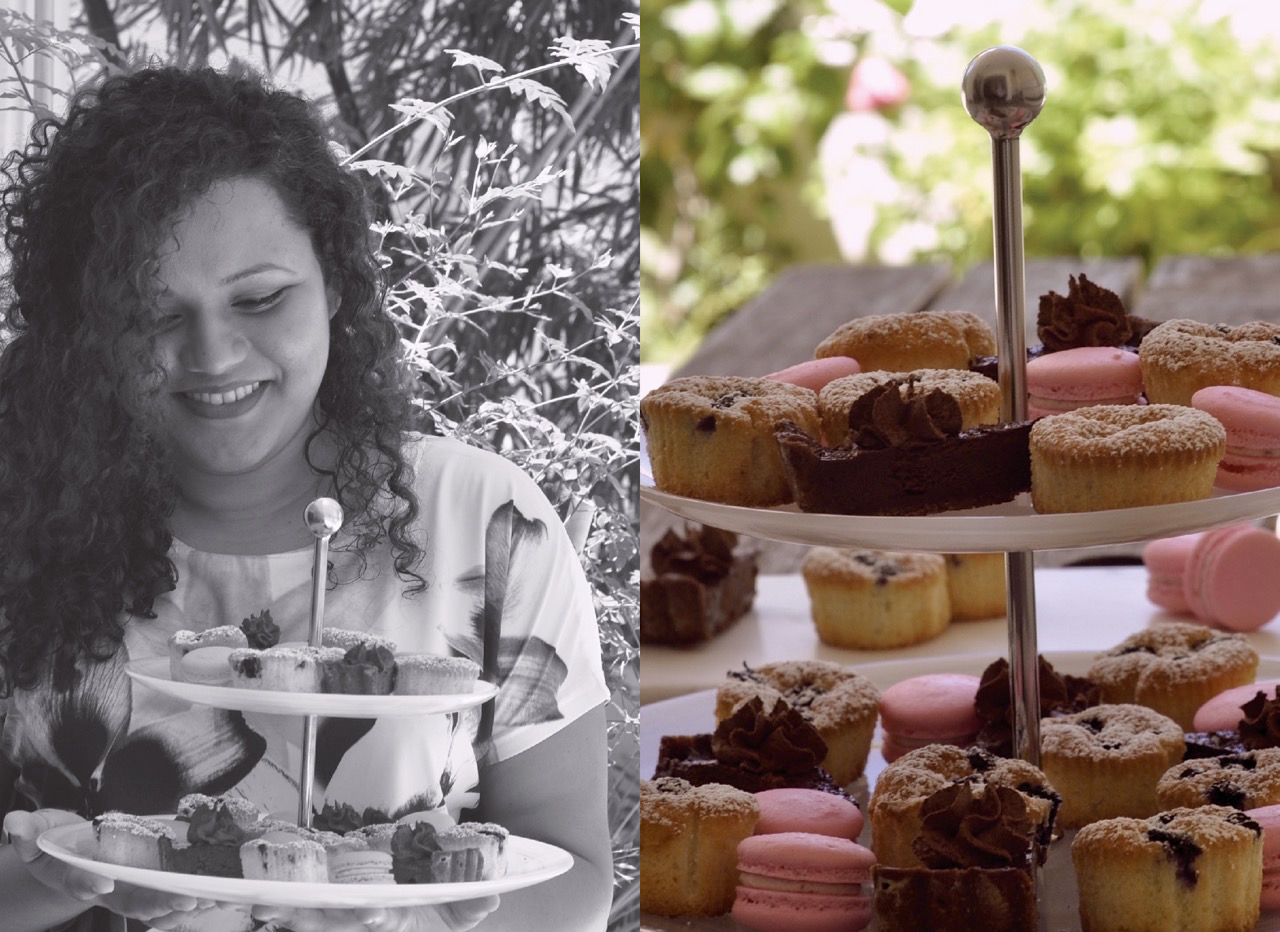 Lonumedhu met with Adlyn Saleem of Adlyn’s Bakery to have a chat about baked goods and sweet delights. She baked us some macarons, berry friands and chocolate tarts, and over a cup of coffee, we talked about many things including her favourite flavours and bakes, inspirations, ovens and cooking shows.

Lonumedhu: My first question is about your macarons. I’ve had them at many weddings. I’ve heard they are very technical and challenging to make, is that true?

Adlyn: Yes they are. It actually takes months and months of practice plus a lot of research since you have to be precise to the decimal point.

Lonumedhu: So it’s all about precision and accuracy?

Adlyn: Yes, for example the top skin must be there before you bake it, and the feet of the macaron shells shouldn’t be that big and it must be even. If it’s too big the macaron shells will be very hard. A macaron has to be chewy inside and crispy on the outside.

Adlyn: They are made with melted chocolate plus chocolate chunks or chips.

Lonumedhu: So, if you have multiple orders for the same day, how do you manage them?

Adlyn: I ask customers to place their orders 48 hours ahead. So there’s one whole day to gather all the ingredients. Often, an ingredient might not be available from the shop I usually buy it from, so I have to go around Male’ trying to find it. It’s also about time management since I have a regular job and bake in the afternoons. The preparation of just one item takes three hours at minimum; for prepping, baking and assembling.

Lonumedhu: Do you bake just for yourself? What do you make?

Adlyn: I go for things with fresh fruits and berries such as friands, that’s a favourite of mine. It’s very light and there is no egg yolk. And snicker doodles.

Adlyn: Snicker doodles are cookies made with cinnamon & nutmeg that are coated in cinnamon sugar. Crispy on the outside and chewy inside.

Lonumedhu: So how did you really get into baking?

Adlyn: I got the baking bug when I was studying in the UK. It started off as something I did to pass the time and I found it interesting.

Lonumedhu: Since you studied in the UK, I have to ask, do you watch The Great British Bake Off?

Adlyn: Yes, I learn such a lot from that, such as when you bake with egg whites you have to let it cool upside down because otherwise it will collapse. And you also have to leave it in the oven with the door open to let it cool down a bit so that the heat can leave gradually since sudden temperature changes will make it collapse as well.

Lonumedhu: Let’s talk about ovens shall we?

Adlyn: I am so glad I found the oven that I use right now. It’s a convection oven so the heat does not come from just one direction. Because the heat revolves, I can get even bakes. When using other kinds of ovens, for example, if you are making macarons, you’ll have to bake one side, take them out and bake the other side so that they would be even.

Lonumedhu: So, how did your baking hobby evolve into a business?

Adlyn: Well, it turned into a business because of my friends actually. They want me to bake because they want to eat the things I make. However, baking for recreation meant I was spending a lot of money on my hobby. So I thought why not fuel my hobby by making it into a business.

Lonumedhu: Do you have an ingredient that you really like? I am sort of into cinnamon.

Adlyn: Yeah I like cinnamon too. Cinnamon is where you go for that comfort food thing. I actually make cinnamon pancakes just for myself. They make me feel happy.

Adlyn: And there’s vanilla, paste and pods. Pods are on the luxury side of vanilla, they are so expensive in Male’. The vanilla paste, the actual thing, I seldom find it in Male’. That’s something I wish was readily available here. Now, most of the time I have to order the paste from abroad.

Lonumedhu: And vanilla smells so good!

Adlyn: It’s recently that I learnt that it’s the seeds of a specific type of orchid. When I came across that fact, I realized we are putting actual orchid seeds into so much variety of baked goods.

Lonumedhu: Vanilla is reminding me of lavender. Have you eaten or used that?

Adlyn: I’ve tasted lavender. It was in a cheesecake. I find Lavender to be a really tricky ingredient. If you put in too much you’ll have its taste throughout the day. You just need to get a whiff or hint of lavender.

Lonumedhu: So where do you get your inspiration from?

Adlyn: Rachel Allen, it was her cookbook that initially inspired me. I think it’s about how she explains things: simple, and she has a ‘anyone can make this’ approach. Also Jamie Oliver, Martha Stewart, and Donal Skehan.

Lonumedhu: Okay last question; do you have any tips for novice bakers?

Adlyn: Be organized. That’s it. Then you’ll never end up forgetting any ingredient. And also time management.

Lonumedhu: So any tips for making a butter cake?

Adlyn: Here’s a tip I got from Paul Hollywood. The trick for a good butter cake is having the butter, flour, sugar and eggs in equal weight.

Lonumedhu: How about a chocolate cake?

Adlyn: For a good chocolate cake, cocoa has to be one-fourth the weight of the other ingredients and three fourth should be flour.